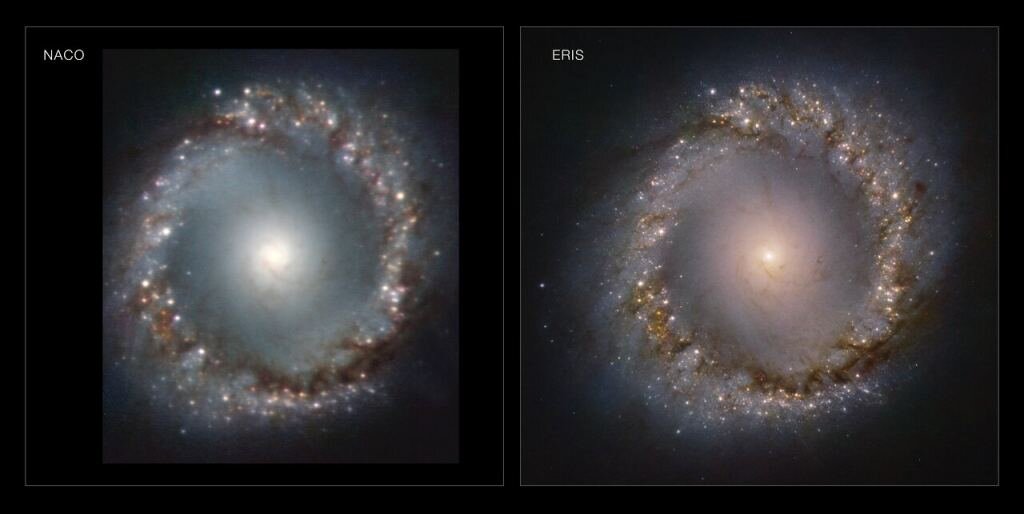 The Very Large Telescope (VLT) at Cerro Paranal in northern Chile is undoubtedly one of the premier ground-based observatories. But a new infrared instrument recently installed on the telescope has made the VLT even better.

The Enhanced Resolution Imager and Spectrograph (ERIS) was delivered to Chile in December, 2021 and the first test observations were carried out beginning in February of this year. ESO, the European Organization for Astronomical Research in the Southern Hemisphere, an international organization which coordinates the use of VLT and several other observatories, says this infrared instrument “will be able to see further and in finer detail, leading the way in solar system, exoplanet and galaxy observations.”

The first official image released from ERIS verifies this assertion. This image above shows the galaxy NGC 1097, comparing the view of ERIS, right, with an image of the same galaxy taken with the previous instrument, NACO, which is comprised of the Nasmyth Adaptive Optics System (NAOS) and the Near-Infrared Imager and Spectrograph (CONICA), left.

As you can see, the new instrument shows the galaxy in incredible detail. NGC 1097 is located 45 million light-years away from Earth, in the constellation Fornax. ERIS’s view shows a clearer picture of the gas and dusty ring that lies at the center of the galaxy, with a crisper view of the bright spots in the surrounding ring, which are stellar nurseries.

The ERIS instrument combines a state-of-the-art infrared imager, the Near Infrared Camera System—or NIX imager (NIX) and an integral-field spectrograph (SPIFFIER—SPectrometer for Infrared Faint Field Imaging), both of which use a laser -assisted adaptive optics system to enhance the imaging performance.

The adaptive optics corrects for the blurring effects of the Earth’s atmosphere in real time. ESO says ERIS will be active for at least ten years and is expected to make significant contributions to a myriad of topics in astronomy, ranging from distant galaxies and black holes through to exoplanets and dwarf planets within our own solar system.

“We expect not only that ERIS will fulfill its main scientific objectives,” said Harald Kuntschner, ESO’s project scientist for ERIS, in a press release“but that due to its versatility it will also be used for a wide variety of other scientific cases, hopefully leading to new and unexpected results.”

ERIS is mounted on the VLT’s Unit Telescope 4 and officials say the upgrade provides some essential improvements to the facility for the coming decade.

“ERIS breathes new life into the fundamentals adaptive optics imaging and spectroscopy capability of the VLT,” says Ric Davies, the Principal Investigator of the ERIS consortium and researcher at the Max Planck Institute for Extraterrestrial Physics. “Thanks to the efforts of all those involved in the project over the years, many science projects are now able to benefit from the exquisite resolution and sensitivity the instrument can achieve.”

Citation: A new instrument gives the Very Large Telescope an even sharper view of the cosmos (2022, November 25) retrieved 25 November 2022 from https://phys.org/news/2022-11-instrument-large-telescope-sharper-view .html