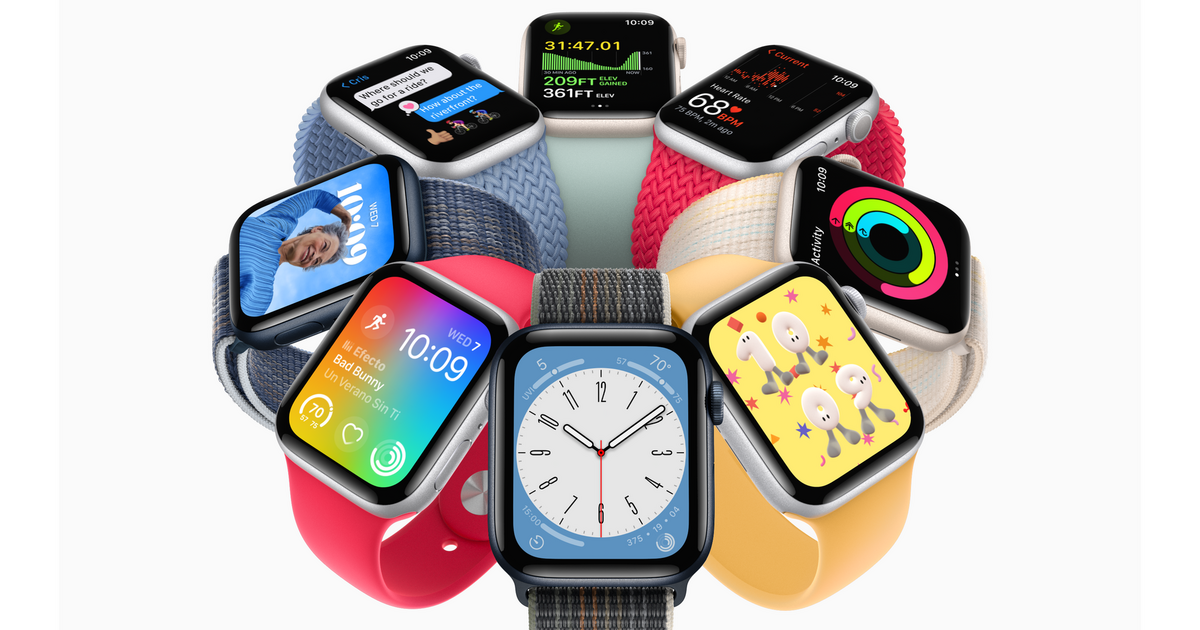 Apple Watch pioneered the smartwatch category and continues to push the envelope of what a watch is capable of with each new model. There’s an Apple Watch for everyone thanks to the new Apple Watch Series 8, a more powerful Apple Watch SE and Apple Watch Ultra, Apple’s most durable and capable watch ever.

When you look at Apple Watch Series 8 and Apple Watch Series 7 side-by-side it’s impossible to tell them apart, because the design is identical. This isn’t such a bad thing since I really like the way the larger 45mm model feels and looks on my wrist. If you prefer smaller watches, there’s the smaller 41mm version of Series 8 or the Apple Watch SE which comes in 40mm and 44mm variations.

While there’s nothing to differentiate the old from the new on the outside, internally, the Series 8 and Watch SE use the new S8 SiP with a 64-bit dual-core processor. In general, I didn’t see a performance difference between Series 8 and SE. Both feel snappy and a lot of the processes that are happening on the watch don’t require something faster. The real updates to the hardware are to the accelerometer and the gyroscope to help with crash detection.

The other new temperature sensor is a major update for women who use Apple Watch. It includes cycle tracking and helps with family planning.

The biphasic shift, which is an increase in temperature that happens as a result of changing hormones following ovulation, can be identified by cyclical patterns in temperature fluctuations. The most popular method for monitoring the biphasic shift is to manually chart basal body temperature in a notebook with a thermometer. By using wrist temperature data to provide retroactive ovulation estimations, Apple Watch Series 8 makes this simpler and more practical.

After around two menstrual cycles, you can receive retroactive ovulation estimates if you wear your Apple Watch to bed every night and have Sleep Focus turned on. Since ovulation estimates may be used to determine when your next period will start, Cycle Tracking also uses wrist temperature to improve period predictions.

Cycle Tracking data is encrypted on your device and only accessible with your passcode, Touch ID, or Face ID.

For now, there’s not much here for men to get excited about. I did use both watches for sleep tracking and the Series 8 showed me daily temperature deviations from the baseline. Interestingly, my skin temperature barely changed. If there was a larger deviation it could be an indication of something that I may need to get checked. It doesn’t give you advice on what you should do with this information as it doesn’t claim to be a medical device.

Apple Watch Series 8 and Watch SE use a new high-g accelerometer and improved gyroscope, plus the barometer, microphone and GPS to detect severe car crashes and automatically connect you to emergency services. This is a big deal and while many may not consider this an important feature, it really is. You might think I can use my phone to make an emergency call in the unfortunate event of a crash. However, you could be pinned in and not be able to reach your phone, whereas your Apple Watch is on your wrist and will check on you if a serious crash is detected and if you are not responding, it will automatically call emergency services, give tell them your location and alert your emergency contacts.

Of course, I wasn’t able to test this, but I feel confident in Apple’s claims that it works. Apple says that to develop the Crash Detection algorithm, the new motion sensor was tested at professional crash-test labs with common styles of passenger cars, including sedans, minivans, SUVs, convertibles, and pickup trucks. The tests were designed to simulate four main types of severe real-world crashes: head-on, rear-end, side-impact, and rollovers.

Crash detection is one of the features that has the potential to save lives. Consider it an insurance policy that you hope you never have to use.

The entirely redesigned Compass app presents more detailed information, new zoomable views for directions and orienteering, the ability to add customizable Compass Waypoints to mark your position or a point of interest, and the ability to retrace your steps with Backtrack if you get lost or disoriented . While you might think you’ll never get lost, again it’s one of those things that comes in handy when you really need it.

With all of the features turned on I regularly achieved a full day of use including sleep tracking with both watches and most days I could stretch them long into a second day. This is on par with previous Apple Watches but is far from class-leading. However, Apple has introduced a new Low Power Mode, that can extend all-day battery life to up to 36 hours of normal use, maintaining features like Activity tracking and Fall Detection while disabling others like the Always-On display on the Series 8 — Apple Watch SE doesn’t have an always-on display feature. It’s quick and easy to find and enable too, but it will turn off features like background heart rate monitoring, irregular rhythm notifications, and blood oxygen measurements (Series 8).

Native sleep tracking is even more powerful now and can provide deeper insights into your sleep with Sleep Stages. You can see a sleep summary, including stage data, in the Sleep app on your Apple Watch. Of course, previously you could use a third-party app like Pillow for this, but it’s good to see it built into Watch OS9 now.

Although Medications is more of an iOS 16 feature, it’s great to see watchOS 9 integration too. The new Medications app on Apple Watch makes it simple to receive reminders and track your scheduled and as-needed medications once you’ve set up your medications in the Health app. Additionally, you can add sophisticated complications to your watch face to quickly see your prescription schedule. I know more than a few people who will greatly appreciate the benefits of this new feature.

The Apple Watch Series 8 is the best overall smartwatch you can buy right now. Sure, the Apple Watch Ultra has extra features as do more fitness-oriented smartwatches, which offer incredible battery life.

In terms of features versus value for money, the new Watch SE is unbeatable, especially if you don’t care about or see a use for the Blood Oxygen monitoring or ECG and temperature sensors found on the Series 8. You get the same snappy and silky smooth performance along with the new crash detection.

If you have an Apple Watch already and it’s time for an upgrade, whether the batteries are not lasting as long as they should, or you’re using something that’s older than the Apple Watch Series 5, then either the Series 8 or SE are well worth their asking price.