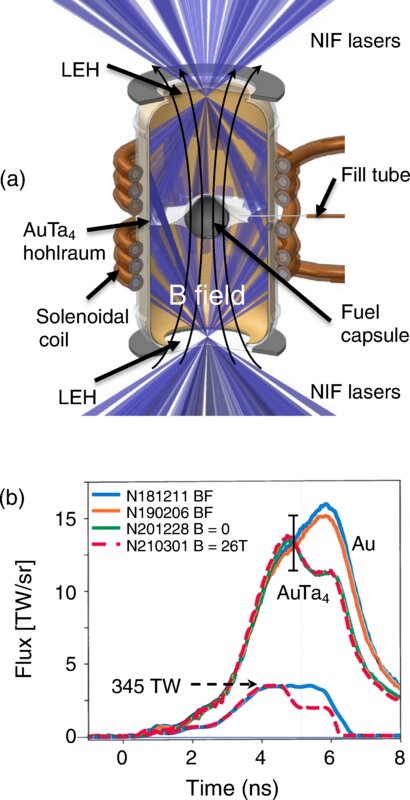 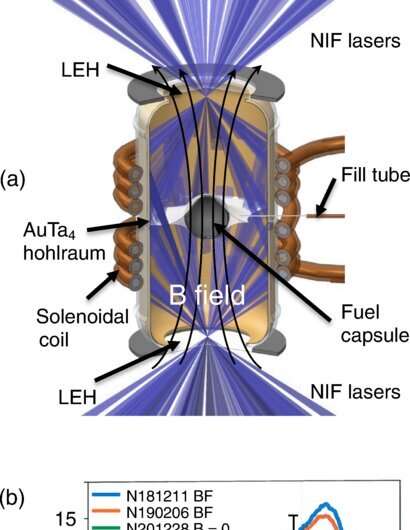 (a) Sketch of the magnetized NIF hohlraum constructed from AuTa4 with solenoidal coil to carry current. (b) X-ray drive measured through one of the LEHs and the incident laser powers for a magnetized and unmagnetized AuTa4 hohlraum and two unmagnetized Au hohlraums. “BF” refers to “BigFoot,” the name of the previous ignition design. Credit: Physical Review Letters (2022). DOI: 10.1103/PhysRevLett.129.195002

A team of researchers working at the National Ignition Facility, part of Lawrence Livermore National Laboratory, has found that covering a cylinder containing a small amount of hydrogen fuel with a magnetic coil and firing lasers at it triples its energy output—another step toward the development of nuclear fusion as a power source.

In their paper published in the journal Physical Review Lettersthe team, which has members from several facilities in the US, one in the UK and one in Japan, describes upgrading their setup to allow for the introduction of the magnetic coil.

Last year, a team working at the same facility announced that they had come closer to achieving ignition in a nuclear fusion test than anyone has so far. Unfortunately, they were unable to repeat their results. Since that time, the team has been reviewing their original design, looking for ways to make it better.

The original design involved firing 192 laser beams at a tiny cylinder containing a tiny sphere of hydrogen at its center. This created X-rays that heated the sphere until its atoms began to fuse. Some of the design improvements have involved changing the size of the holes through which the lasers pass, but they have only led to minor changes.

Looking for a better solution, the team studied prior research and found several studies that had shown, via simulation, that encasing a cylinder in a magnetic field should significantly increase the energy output.

Putting the suggestion into practice, the researchers had to modify the cylinder—originally, it was made of gold. Placing it in a strong magnetic field would create an electric current strong enough to tear the cylinder apart, so they made a new one from an alloy of gold and tantalum. They also switched the gas from hydrogen to deuterium (another kind of hydrogen), then covered the whole works with a tesla magnetic field using a coil. Then they fired up the lasers. The researchers saw an immediate improvement—the hot spot on the sphere went up by 40% and the energy output was tripled.

The work marks a step towards the ultimate goal—creating a fusion reactor that can produce more energy than is put into it.