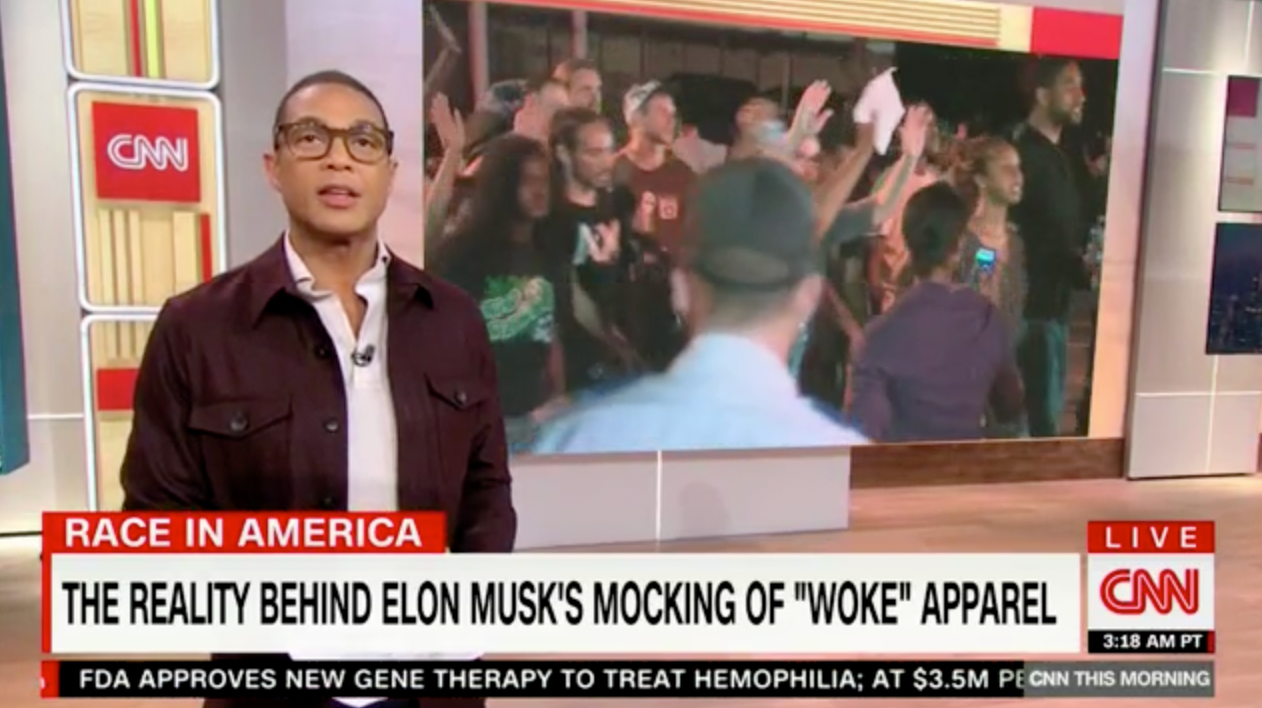 In an effort to fact-check Twitter owner Elon Musk on Thursday, CNN’s Don Lemon presented a dramatically watered-down version of the infamous “Hands up, don’t shoot” myth that emanated from Michael Brown’s death in Ferguson, Mo., in 2014.

The left-wing host declared that “context” was needed after Musk posted a tweet saying the mantra was “made up.” Musk posted and deleted the tweet about Brown’s fatal shooting upon finding a closet of “#StayWoke” t-shirts at Twitter headquarters. The phrase became a national rallying cry for racial justice protests against police, but the Obama administration’s Department of Justice concluded after an extensive investigation that Brown had not raised his arms in surrender before being fatally shot by Officer Darren Wilson.

Lemon, after declaring, “facts first,” told viewers that “some said” Brown was trying to surrender when killed by Wilson. He then said that the DOJ report “cast doubt” on that account in a clip flagged by conservative media watchdog NewsBusters.

“The DOJ did not find grounds to charge the officer but in a separate report that same day, it did find evidence of systematic racial discrimination in Ferguson at the hands of the city’s police department and municipal court,” Lemon said, noting that Blacks were far more likely to be searched in vehicle stops than Whites and the overwhelming majority of those ticketed were Black.

“So remember, ‘Hands up, don’t shoot’ after Ferguson became a nationwide protest symbol for police mistreatment of minorities. It was about more than the shooting of Michael Brown. It was about the pattern of police shootings and brutality in this country ,” Lemon said.

Lemon then appeared to stumble over the teleprompter, saying, “And #StayWoke, which mocked – Musk mocked, was how Twitter wanted … called out racial justice, was how they wanted to call out racial injustice.”

Lemon did not tell viewers that it was under the Obama administration that the Department of Justice cleared Wilson in the shooting and buried the “Hands up” narrative.

It is now widely agreed, even in liberal media outlets, that the mantra was not based in fact. The Washington Post put it bluntly in a pair of headlines in 2015: “‘Hands up, don’t shoot’ was built on a lie,” by left-wing opinion writer Jonathan Capehart, and “‘Hands up, don’t shoot ‘ didn’t happen in Ferguson,” in a fact-check article by Michelle Ye Hee Lee.

“Brown never surrendered with his hands up, and Wilson was justified in shooting Brown,” Capehart wrote.

“Investigators have overwhelmingly rejected witness accounts that Brown had his hands up in a surrender before being shot execution-style,” Ye Hee Lee wrote. “The DOJ has concluded Wilson did not know whether Brown was armed, acted out of self-defense and was justified in killing Brown. The majority of witnesses told federal investigators that the initial claims that Brown’s hands were up were not accurate. ‘Hands up , don’t shoot’ didn’t happen in Brown’s killing.”

The Washington Post also forcefully fact-checked Democrats like Sen. Elizabeth Warren, D-Mass. and then-Sen. Kamala Harris, D-Calif., when they declared in 2019 that Brown had been “murdered.” The DOJ report cited numerous witnesses who said Brown did not have his hands raised and charged at Wilson before being shot and killed, ignoring repeated directives to “get down.” This came after Brown, having been stopped by Wilson as a suspect in a robbery that evening, punched and grabbed Wilson in his car.

In 2014, CNN pundits mimicked the “Hands up, don’t shoot” pose in solidarity with protesters. The Department of Justice under the Obama administration later revealed that Michael Brown had not raised his hands before being killed by a policeman.
(CNN/YouTube)

In 2014, CNN pundits mimicked the “Hands up” pose in solidarity with protesters, while legal analyst Sunny Hostin held up a sign saying, “I can’t breathe,” a reference to the death of Eric Garner in New York. The on-air stunt later became a punchline for critics who viewed it as emblematic of CNN’s left-wing shift under then-president Jeff Zucker.