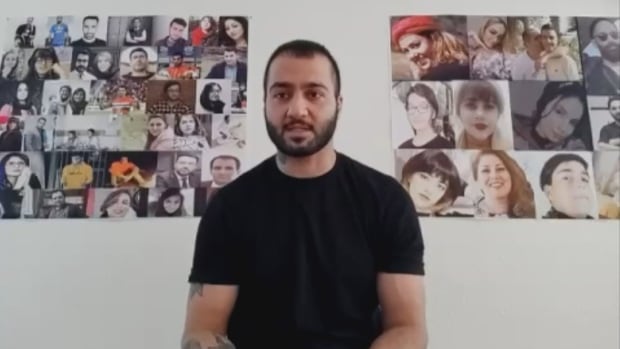 The family of an Iranian dissident rapper is fearful for his life, saying the regime is trying to charge him with a crime that carries the death penalty.

Toomaj Salehi, 32, has heavily criticized the Islamic Republic through his lyrics and was arrested last month amid the ongoing protests and violent crackdowns in the country. The underground rapper, known by his first name, was also actively supporting the protests in Iran, releasing music, sending messages of support and even showing up on the streets himself.

Toomaj’s cousin, Azadeh Babadi, who is based in London, told CBC News she believes the rapper will not receive due process.

“They have denied him a lawyer of his choice and assigned him a regime-appointed one instead,” she said.

Babadi said the family believes the judiciary plans to charge Toomaj with being a mohareb — meaning someone who “wages war against God.” These are charges that under Iran’s Islamic Sharia law result in a death sentence and subsequent execution.

The regime in Iran has a long history of accusing dissidents of being “moharebs,” said Toronto-based lawyer and human rights activist Kaveh Shahrooz.

“Such a charge, and the fact that it carries a penalty of death, is hard to comprehend for many Westerners, because it seems so medieval. And it is. It speaks to the fact that Iran’s regime has a mindset belonging to the dark ages Shahrooz said.

Babadi said the regime is trying to craft a narrative to back such a sentence. She said they are trying to fabricate evidence that Toomaj was using money to buy weapons to support the popular protests in Iran.

In an interview last month with CBC News, however, Toomaj maintained that the people should continue to resist peacefully until they reach millions.

The Islamic Republic has been gripped by nationwide protests since the death of 22-year-old Kurdish woman Mahsa Amini on Sept. 16 in the custody of the so-called morality police.

At least six people connected to the protests have been sentenced to death on charges of moharebeh the UN High Commissioner for Human Rights (UNHCR) said in a news release Tuesday. Last week, Amnesty International reported that Iranian authorities are seeking the death penalty for at least 21 people involved with the protests — including Saman Seydi, a Kurdish rapper.

While those are official death sentences, the Islamic Republic previously cracked down on anti-regime protesters in 2019, killing 1,500 in less than two weeks in what has become known now as “Bloody November.”

WATCH | Toomaj on why the protest in Iran will keep growing:

Hundreds of people have died as a result of a hardening of the authorities’ response to the current protest, according to the UNHCR. That figure includes at least 40 children. According to multiple reportsover 15,000 people have been arrested, including artists and thought leaders who have expressed support for the protests.

Many assume the numbers of deaths and arrests to be much higher, given the challenges in getting information out of Iran. The crackdown has led to a special and historic session at the United Nations, where its Human Rights Council voted Thursday in favor of creating a new fact-finding mission to investigate reported human rights violations in Iran, related to the protests.

Toomaj’s family said the rapper was tortured heavily while abducted and later detained at an Isfahan prison. They say they have information that his leg was broken due to a gunshot wound. They say reports suggest his foot is now in a cast.

For over three weeks, the rapper’s father has shown up to the prison in hopes of seeing him or speaking with him. Babadi said the family believes that Toomaj’s physical condition must be so dire, that the authorities are stalling for time and are not allowing anyone access to him.

She said regime agents are continuing to harass and pressure the family in Iran, to stop them from asking questions and showing up to the prison. On several occasions, Babadi said the authorities have told the family lies to distract them or to “tire them out.”

Iranian rapper Gdaal, who is from Tehran and now based in Toronto, said Toomaj reached out to him amid the current protests.

“He’s the real rebel. He’s a real revolutionary. People like Toomaj made me imagine that I could go back to Iran. He inspired me to be an activist. All my life is dedicated to this now. Nothing else matters anymore. I just want Toomaj’s goal to become a reality,” he said.

Toomaj told CBC News last month he wasn’t worried about his own life or safety, but did worry that if he was arrested, it would dampen the spirit of young protesters.

But so far, there is no sign of this. On social media, Iranians have been using the hashtag #Toomaj_Salehi, in Persian, to raise awareness of his arrest. Many are tweeting his songs, lyrics and portions of his YouTube videos to keep his message of fighting for regime change and freedom alive.

Los Angeles-based Iranian rapper Erfan Paydar said Toomaj is one of the most important figures in this movement. “Unlike others … he showed his face. He was on foot in Iran. The world needs to know that he walked the walk. He believed in action. He led by example,” Paydar told CBC News.

Toomaj’s Twitter, Instagram and Telegram accounts are being run by his team, as they continue to push out messages and updates about protests in cities across the country.

When the Islamic Republic’s state broadcaster IRIB published a video on social media Nov. 2 purportedly showing Toomaj expressing regret for comments he had made, Iranians reportedly refused to share the video, saying they didn’t want to take part in the regime’s propaganda.

Protests in several cities, including Toronto, Los Angeles and Berlinhave sought to bring attention to Toomaj’s case in the hopes to see him freed.

Iranian rappers call on the rap industry in the US, Canada

Many Iranians are calling on the rap community, particularly in the US, to shine a spotlight on Toomaj’s case.

“I would like to see the international rap community to really stand behind the movement in Iran, especially behind someone like Toomaj,” Erfan said.

While many celebrities, including Kim Kardashian and Justin Bieber, have posted about protests in Iran on social media, Gdaal said he’s disappointed and frustrated that the rap community has not done the same for Toomaj.

“I don’t know why they don’t say anything about him.… The rap industry in the US is like heaven, if you compare it to Iran. The day you’re famous, you’re rich. The day you’ re famous in Iran, you’re in danger.”

He said he’s also surprised Canadian rappers like Drake or the Weeknd haven’t said anything publicly about Toomaj. He says both are from Toronto and are likely aware of what is happening in Iran, given the large diaspora in the city.

An artist inside Iran, whom CBC News has agreed not to identify given the ongoing violence targeting dissidents, also said he would like to see rappers in the West support Toomaj.

“I would like real rappers to support Toomaj, because he is a true rapper and is protesting the system in a country that is among the most criminal in history. It’s a sign of his courage and his fight for freedom,” he said.

“And this is the sign of a real rapper — that he always fights against injustice and stands up for his people.”

He says he wants American rapper NF to be the voice of Toomaj. “He’s one of the few rappers Toomaj likes and even hopes to collaborate with one day,” he said.

As of Thursday evening, nearly 60,000 people had signed their names to an online petition started by Toomaj’s family and supporters, calling for the release of the rapper. The petition is to be delivered to Javaid Rehman, the special rapporteur on the situation of human rights in the Islamic Republic of Iran.

The artist inside Iran told CBC News that although he’s worried about many scenarios, his biggest worry is that the protesters will lose their hope or be discouraged and not continue with their fight against the regime.

WATCH | Toomaj says we only see a sliver of what’s happening in Iran:

Videos coming out of Iran a ‘small picture’ of what’s happening, says Toomaj

He said Toomaj would want the protesters to continue, no matter what happens to him.

“I see myself as one person among protesters. That’s it. I don’t see myself as anything else.… Whenever I go to protests, I always worry that if I’m arrested, that a segment of protesters will lose hope. Or will get sad,” Toomaj told CBC News in October.

“We don’t have time for grief. If my loved ones, on either side of me, are killed, I have to become angry, I have to pursue justice.”

Gdaal said he wants Toomaj and other political prisoners who have been jailed by the Islamic Republic to see a free Iran.

“This dictatorship, all the suffering we have endured. It made us give up. We all thought the Islamic Republic is the big bad wolf that will never go away. But, after seeing people like Toomaj fight, I am hopeful that there will be an end to the regime.”