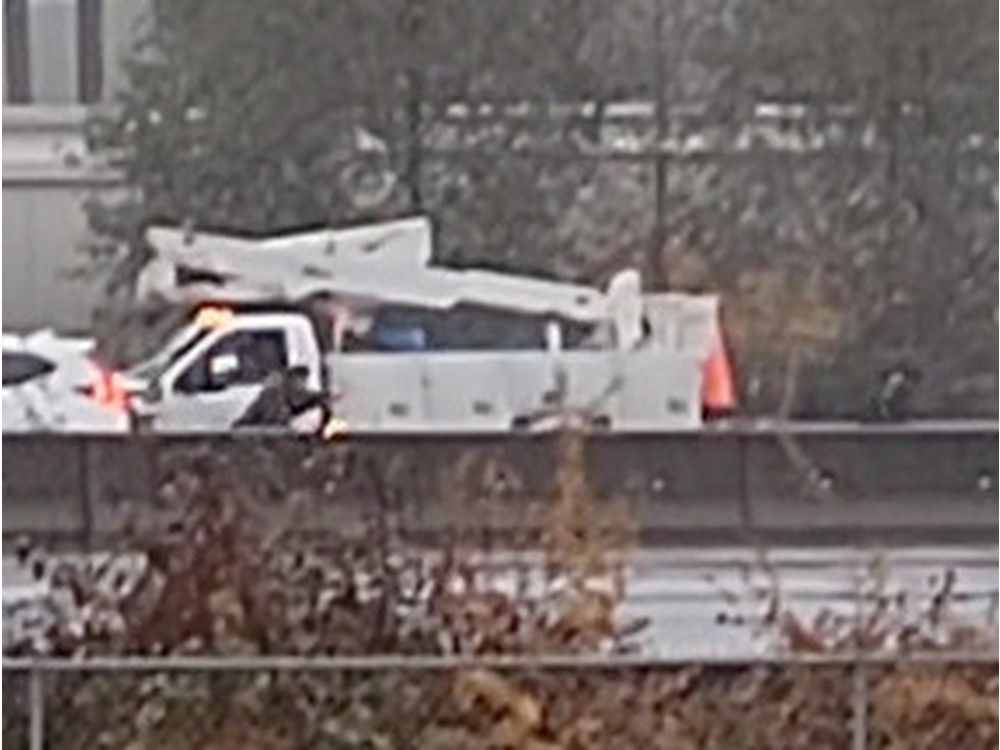 Metro Vancouver police departments are searching for two remaining suspects from a wild Tuesday afternoon car chase that followed an armed robbery at a car dealership, gunfire being exchanged with police and a carjacking.

Start your day with a roundup of BC-focused news and opinion delivered straight to your inbox at 7 am, Monday to Friday.

The next issue of Sunrise presented by Vancouver Sun will soon be in your inbox.

At about 3:40 pm, police responded to a report of four armed suspects stealing a car from the Journey Auto Group dealership near Lougheed Highway and Dominion Avenue in Port Coquitlam.

“The armed assailants physically battered the staff and robbed them of personal belongings,” Kornatowsky said.

“They then stole a high-end vehicle to use for the getaway, as well as the vehicle they arrived in.”

One staff member was taken to hospital.

Kornatowsky praised his staff, saying they remained calm during a “chaotic armed robbery.”

According to the Coquitlam RCMP, the suspects and police exchanged gunshots during the chase that ensued. The police did not say whether they were chasing one or two vehicles.

Part of the police chase captured on video at the intersection of Lougheed Highway and Pitt River Road showed a black Mercedes sedan traveling at high speeds under pursuit.

The stolen vehicle crashed on Highway 1 in Coquitlam near the King Edward overpass and police said all four suspects fled. This indicates that they were chasing one vehicle.

Witness Randy Kang said he stepped out of his job at Lougheed Acura at 4 pm and saw several police vehicles.

He then spotted police officers chasing the suspects. One suspect fell to the ground and was surrounded by police, while the others continued to flee.

Kang said he heard what sounded like three gunshots aimed at the remaining suspects, but they appeared to escape.

“It was terrifying,” Kang said. “I was very concerned for the public.”

Other witnesses in vehicles that were caught in the area saw heavily armed police running through traffic looking for suspects.

Hodgins said that one suspect was arrested on Highway 1, while another carjacked a vehicle on the highway and fled to Surrey where they were arrested.

On Wednesday, Coquitlam RCMP said they were still searching for two suspects.

During the incident the Scott Road (Surrey) and Braid (New Westminster) SkyTrain stations were closed, with a heavy police presence in those areas.

Hodgins said no police officers were injured. The two suspects who were arrested were also unharmed.

“We would like to thank our policing partners in Burnaby, Surrey, New Westminster, Vancouver, Maple Ridge and the Lower Mainland Emergency Response Team (ERT) for their assistance,” Hodgins said.

“We appreciate and thank the public for their assistance in adhering to police directions. This was a very dynamic investigation with several crime scenes which required additional assistance from numerous jurisdictions.”

More news, fewer ads: Our in-depth journalism is possible thanks to the support of our subscribers. For just $3.50 per week, you can get unlimited, ad-lite access to The Vancouver Sun, The Province, National Post and 13 other Canadian news sites. Support us by subscribing today: The Vancouver Sun | The Province.