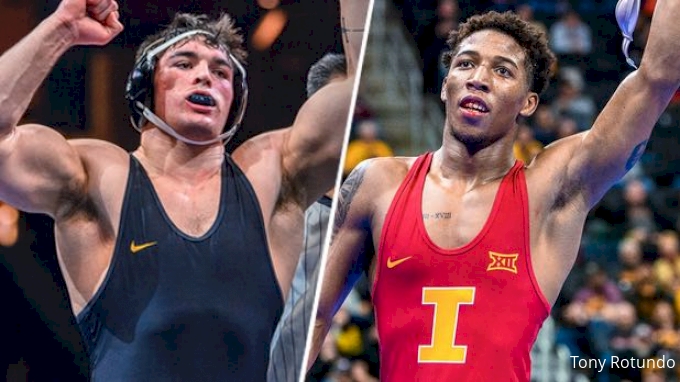 Iowa defeated Iowa State, 18-15, after each team won five matches. Bonus points were the difference for the Hawkeyes as they picked up major decisions from Spencer Lee, Cobe Siebrecht, and Nelson Brands. This dual also marked the season debut of Spencer Lee who kicked things off for Iowa at 125 pounds.

First period: Lee scores immediately and gives up an immediate escape then picks up another takedown for a 4-1 lead. A four-point tilt makes it 8-1 with two minutes to go. Lee picks up four more halfway through the period for a 12-1 lead. An escape with a minute to go makes it 12-2.

Second period: Cabanban chooses neutral. Cabanban scores on a shot late for a takedown to cut the lead to 12-4.

First period: Schriever was in on a shot halfway through the period but Attasauov countered. No scoring in the first period.

Second period: Attasauov chooses down and escapes in 15 seconds for the first point of the match. Schriever is in on a single with 35 seconds remaining and Attasauov kicks out. No scoring for the remainder of the period.

Third period: Schriever starts down but Attasauov seems committed to the ride as the crowd is calling for stalling. Schriever sits out and gets the escape with 1:15 to go to tie the score, 1-1. Attasauov scores a takedown on the edge of the mat to take a 3-1 lead. He rides the remainder of the period for the win.

Second period: Swiderski takes down. Woods has Swiderski flat for the first minute. A second stall warning gives Woods the first point of the match with 27 seconds left in the period. Woods rides out Swiderski the entire period and has a 1-0 lead.

Third period: Woods takes down and escapes in seven seconds for a 2-0 lead. Swiderski spins behind a Woods shot and scores a takedown to tie the score 2-2 but an escape makes it 3-2 with a minute to go. Swiderski attempts a few shots but can’t score. Woods wins, 4-2, with riding time.

First period: Johnson is in on a shot with 2:10 to go but Murin counters and a stalemate is called. Lots of hand fighting during the second minute. More hand-fighting leads to a scoreless first period.

Third period: Johnson chooses down and is up to his feet but Murin keeps him on the mat as they go out of bounds with 1:33 to go. Johnson eventually escapes to make it 1-1. No scoring the remainder of the match.

Sudden victory: Johnson in on a shot with 45 seconds left but Murin countered. Johnson hits a sweep single at the buzzer for a 3-1 win.

First period: Siebrecht hits a lace leg throw for a feet-to-back takedown and a 6-0 lead after Kraisser recovers. Kraisser escapes with 18 seconds left but Siebrecht takes a 6-1 lead into the second.

Second period: Kraisser starts on the bottom and escapes in 20 seconds to cut the lead to 6-2. Kraisser hits a shot but Siebrecht comes out the back door in a wild scramble as the two flop around until a stalemate is called.

Third period: Siebrecht starts down and Kraisser puts the leg in. He appears committed to the ride for the time being. Siebrecht gets to his feet and Kraisser lets him go and Siebrecht scores a takedown a few seconds later for a 9-2 lead. Kraisser nearly escapes but Siebrecht holds on for a 10-2 major decision with riding time.

First period: No scoring a minute into the match. Low shot but Carr converts for a takedown with 1:05 remaining Kennedy immediately escapes to make it 2-1. Carr converts on a head-to-the-outside shot for another takedown and a 4-1 lead at the break.

Second period: Carr chooses down and escapes immediately for a 5-1 lead. Sweep single by Carr converts for his third takedown and a 7-1 lead. Kennedy escapes with 15 seconds remaining and cuts the lead to 7-2.

Third period: Kennedy starts on the bottom and escapes to make it 7-3. Carr hits a single and scores with 20 seconds left and gives up the run for a 9-4 lead. Riding time gives Carr a 10-4 win.

Second period: Gaitan chooses down and escapes, but Brands still leads, 7-5. Brands goes feet to the back and almost gets a near fall but only the takedown is scored. Brands leads, 9-5. Brands commits to the ride and takes Gaitan back to the mat with force as the period ends.

Third period: Brands chooses down and escapes for a 10-5 lead. Brands hits a single and switches to a double for another takedown and a 12-5 lead. He rides Haitian for the remainder of the period for a 13-5 major decision with riding time.

First period: No scoring after a minute. Assad hits a single with 1:17 left but a stalemate is called with 58 seconds to go. No scoring.

Second period: Coleman chooses down and escapes in five seconds for the first point. Assad hits another shot halfway through the period but Coleman counters out and they are back on their feet. Coleman leads, 1-0.

Third period: Assad chooses down and escapes in 26 seconds. The score is tied, 1-1. Assad hits his third shot but this time Coleman counters for a takedown and a 3-1 lead. An escape by Assad makes it 3-2 and Coleman holds on as Assad gives chase. Coleman wins, 3-2.

Second period: Bastida picks neutral. A fiery exchange halfway through the period yields no points but adds a little excitement. Warner in on a shot but Bastida kicks out. Bastida still leads, 4-1.

Third period: Warner chooses bottom and escapes in 19 seconds to cut the lead in half. Tom Brands throws the brick on what appears to be a potential headgear pull against Bastida. Challenge won. Bastida was penalized and now leads, 4-3. Warner in on a shot as the crowd goes crazy but Bastida kicks out at the buzzer and holds on for a 4-3 win.

First period: Cassioppi scores on a single in 47 seconds for a 2-0 lead. Stall warning against Schuyler with 1:20 to go. Cassioppi locks up a ba arm with 45 seconds remaining and the crowd is up for grabs, calling for stalling on the bottom. Cassioppi doesn’t get a turn but leads, 2-0.

Second period: Cassioppi starts down and immediately escapes for a 3-0 lead. Cassioppi hits a double then comes up high around the stomach for another takedown and a 5-0 lead. Cassioppi was hit for stalling on top, which is his first warning. He rides out the period and keeps his 5-0 lead.

Third period: Schuyler in on a shot and scores a takedown to cut the lead to 5-2 after locking up a cradle. Cassioppi escapes for a 6-2 lead with a minute to go. A takedown and riding time makes it 9-2.