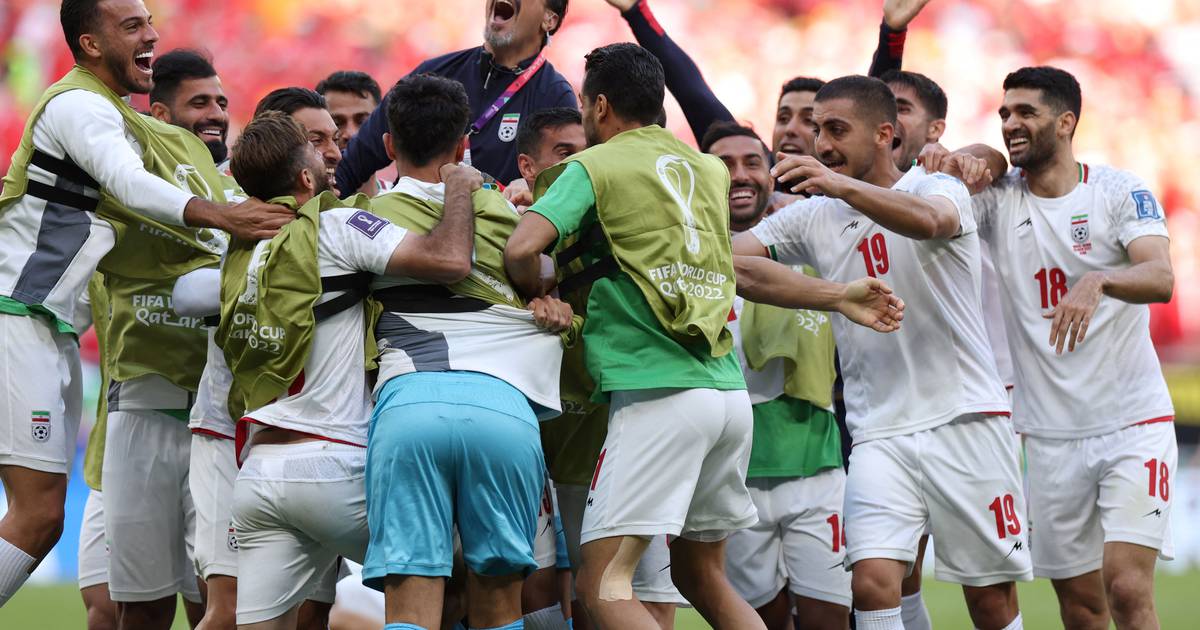 Just as the clocks on the big screens at either end of this stadium ticked into the eighth minute of stoppage time, Wales eventually cracked. For so long it seemed they would somehow avoid losing a match that transpired into the epitome of living dangerously well before Wayne Hennessey was sent off for inadvertently poleaxing Mehdi Taremi on 86 minutes.

But then the substitute Roozbeh Cheshmi curled home from the edge of the box and Ramin Rezaeian put the gloss on a victory in the 11th minute of stoppage time, denting Wales’ now slim hopes of progressing to the last 16 in the process.

Sardar Azmoun, the Iran striker, grabbed Carlos Queiroz’s cheeks with joy at the final whistle, before attempting to piggyback his manager moments later, and Iran soon set off on a victory lap as some of Wales’s players lay floored. When Cheshmi struck, Wales could not exactly say it had not been coming.

They had been clinging on – Iran earlier rattled the woodwork twice inside 20 seconds in the second half – and Gareth Bale’s hands were clasped behind his back in the box, frantically trying to prevent the possibility of giving away a penalty as Iran peppered the Wales goal .

The emotions of a game that was always going to be a fraught occasion given the delicate complexion of Group B, and the reality that England awaits on Tuesday, were only enhanced before kick-off when Iran’s players broke their silence by singing their national anthem.

Taremi had said that none of the squad were under pressure to sing despite the threat of reprisals at home. The anguish as some players mumbled half-heartedly through the chorus spoke volumes. In the stands, Iran’s thumping support made clear their disdain for their government, jeering their own players. Tears streamed down the cheeks of a woman and a man carrying an Iranian flag appeared inconsolable.

Wales avoided going a goal down when Ali Gholizadeh’s first-half goal was correctly ruled offside, but Wales wilted in the heat of the battle. They were overrun in midfield and failed to stop the bleeding.

Hennessey rushed out of goal to confront Taremi as he latched on to a long ball upfield and the Wales goalkeeper inadvertently left the Iran striker in a heap. The referee, Mario Escobar, initially handed Hennessey a yellow card, but a VAR review upgraded the punishment to a red card.

Joe Allen entered as a substitute late on for a first World Cup appearance but his desperate attempt to block Cheshmi’s shot was in vain as his right-foot shot, via the substitute goalkeeper Danny Ward’s fingertips, nestled in the bottom corner. Delirium followed as Iran’s bench emptied on to the pitch and they followed suit when Rezaeian dinked the ball over Ward. Wales will take some lifting.

Wales manager Rob Page struggled to contain his annoyance after saying too many of his players endured off-days.

Page said he would lift his players, many of whom crashed to the floor at full time, before Tuesday’s final Group B match against England. “We can’t sit and cry about it,” the manager said. “We want to give our supporters something to cheer about. They have shown massive commitment to come over [to Qatar] and it really disappoints me that we’ve given them that. We’ll bounce back, we’ll pick them up and go again.”

Bale and Aaron Ramsey were among the Wales players who seemed to wilt in the intense afternoon heat before Iran prospered. “We weren’t in the game at all,” Page said. “Even in the first half, before the sending-off … you can carry one or two players if there are off-days but when the majority of the team are not quite at it there is only going to be one outcome, unfortunately . It [qualifying] is out of our hands now.

“Before the send-off I wasn’t happy with the performance,” he said. “They hit the post twice, they had a goal ruled out for offside, which was marginal. We just couldn’t get going in the game and that disappoints me the most. We fell well below the standards that over recent months have given us the success to qualify for the World Cup … when you do that in top competitions you get punished.”

Queiroz said he was delighted with the way his players responded from their 6-2 thrashing by England. He dedicated the victory to Iran fans, many of whom inside the stadium cheered his players singing the national anthem after they had remained silent during Monday’s anthem.

“It was very emotional but special because we rebounded from a difficult situation,” Queiroz said. “Nobody likes to lose and when you lose with those numbers it is always a tough job. We went back to our roots. I think we played brilliantly. We wanted to give this gift to Iran fans. This game was a gift to the fans from the north, south, east, west – it’s a gift to all of them.” – Guardian