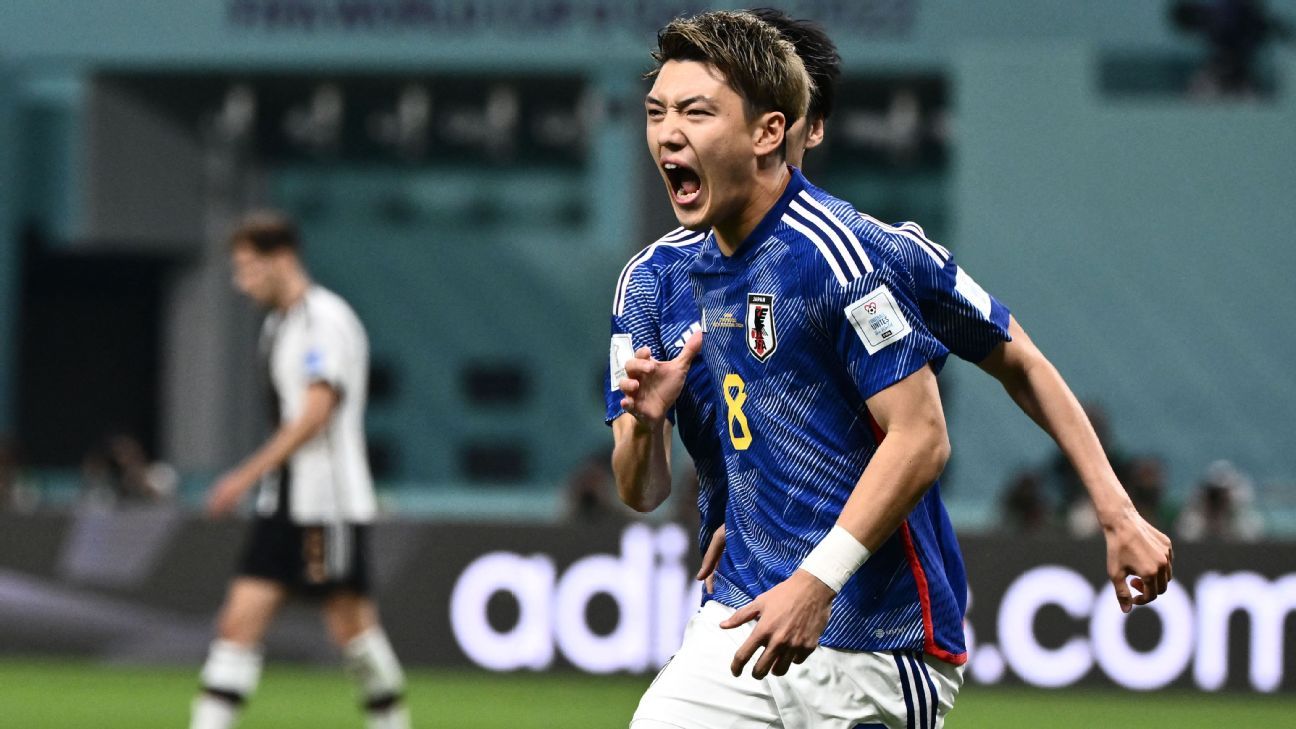 When Japan coach Hajime Moriyasu announced the goal of reaching the quarterfinals of the 2022 FIFA World Cup, it elicited a bit of a mixed reaction.

Of course, as a proud footballing nation, the Samurai Blue were always going to set a high bar for themselves — and it was understandable that they would aim to go further than they ever have previously.

At the same time, the luck of the draw had not been kind to them and with two former champions in Germany and Spain also in Group E, along with Costa Rica, a top-two finish was always going to be a testing proposition.

But after Wednesday, when Japan opened their campaign with a stunning come-from-behind 2-1 win over the Germans at Khalifa International Stadium, what previously looked like a longshot now appears a lot more realistic.

Trailing at the break through an Ilkay Gundogan penalty, the Samurai Blue started to show a lot more endeavor and directness as the second half wore on and an incisive attack down the left initially paved the way for Ritsu Doan to fire home on the rebound in the 75th minute — after Takumi Minamino‘s initial cross-shot had been parried away by Manuel Neuer.

While they could have been forgiven for settling for a draw, Japan continued to send the ball forward whenever they could and, with seven minutes remaining, Ko Itakura‘s searching ball from the back released Takuma Asanowho did well to hold off a recovering Nico Schlotterbeck before blasting a shot past Neuer at the near post that sealed a sensational victory.

Plenty has been made about how Japan has benefited from the fact that many of their players are familiar with German football playing in the Bundesliga.

After all, the likes of Doan, Asano and Itakura are all currently plying their trade in Germany, along with captain Maya Yoshida and playmaker Daichi Kamada to name but a couple more.

Yet, to claim that was the main reason behind Wednesday’s triumph would be discrediting the spirit that Japan showed with their backs against the wall against a powerful opponent.

Perhaps the biggest strength the Japanese have is an unerring belief in themselves despite the odds seemingly against them initially.

“Before the game, we already had the confidence that we could beat Germany,” Doan told ESPN.

“I respect Germany and how good they are. In the end, they had a big chance in the box but we also had a bit more luck than Germany.”

Doan’s sentiments were echoed by Arsenal defender Takehiro Tomiyasuwho came on at halftime as the Samurai Blue switched from a 4-4-1-1 formation to a 3-4-3, and helped provide added stability at the back as well as a passing option out of defense.

“This was a big three points for us and it was not an easy game,” Tomiyasu told ESPN.

“We adopted a man-to-man defense in the second half and it worked. That’s why we could win.

“I think we knew we had enough quality to beat them and we managed to, so we proved what we can do on the pitch against very difficult opponents. But we need to be focused on the next one.

“We don’t have to change a lot of things because we got three points today. But of course it won’t be an easy game against Costa Rica, so we have to prepare as much as we can.”

Victory in that next game against Costa Rica, which would take them up to six points, would almost guarantee their place in the Round of 16.

That would arguably be the minimum pass mark given how far they went four years ago in Qatar.

But you can bet — based on the spirit they displayed against Germany — they will have full belief that they can go even further and reach their quarterfinal goal.