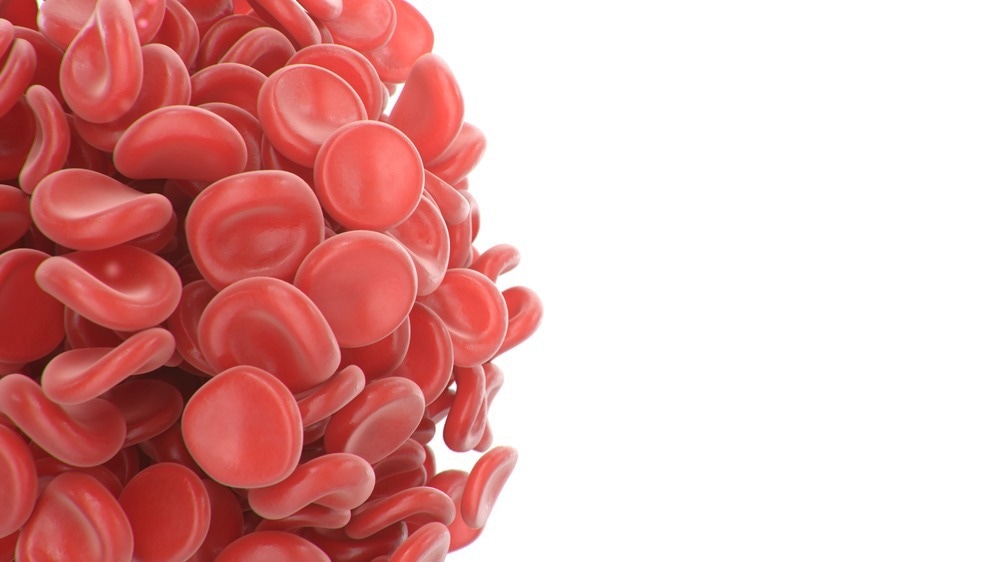 In a recent Nature Communications journal paper, researchers determine the rates of thrombosis, thrombocytopenia, and thrombosis with thrombocytopenia following severe acute respiratory syndrome coronavirus 2 (SARS-CoV-2) vaccination and infection. These rates were compared with background (expected) rates assessed in the general population of the United Kingdom.

Study: Thrombosis and thrombocytopenia after vaccination against and infection with SARS-CoV-2 in the United Kingdom. Image Credit: Rost9 / Shutterstock.com

Concerted scientific efforts led to the rapid development of coronavirus disease 2019 (COVID-19) vaccines using several platforms, the most successful being messenger ribonucleic acid (mRNA)-based vaccines. Subsequently, ChAdOx1 nCoV-19, an adenovirus-based, and BNT162b2, an mRNA vaccine, received approval for use in the UK on December 8, 2020, and December 31, 2020, respectively. Real-world data showed that these vaccines were highly effective against symptomatic COVID-19, severe illness, and hospitalization.

Yet, some rare adverse events, such as thrombosis, were reported following vaccination during immunization programs. As of May 26, 2021, the UK reported thromboembolic events with thrombocytopenia following primary vaccination using ChAdOx1 nCoV-19 and BNT162b2. Importantly, fewer safety concerns for the BNT162b2 have been reported, with instances of immune thrombocytopenia remaining rare among BNT162b2 recipients.

In the present study, researchers assessed six cohorts of individuals from the UK general population to study the effect of COVID-19 vaccination. Four vaccinated cohorts included individuals vaccinated with ChAdOx1 or BNT162b2 vaccines. These individuals received either their first or second dose between December 8, 2020, and May 2, 2021, and were followed up until 28 days from the index date.

The fifth cohort comprised unvaccinated individuals who contracted COVID-19 between September 1, 2020, and May 2, 2021, as confirmed by a reverse transcription-polymerase chain reaction (RT-PCR) test. All study participants in this cohort were followed up with up to 90 days following their initial diagnosis.

The sixth cohort, which was otherwise known as the general population background cohort, included people from Clinical Practice Research Datalink (CPRD) AURUM as of January 1, 2017. The team followed up with this cohort up to December 31, 2019.

Study participants older than 20 years were included in the primary analysis and provided their prior medical history of at least one year.

The number of events and observed and crude incidence rates (IRs) per 100,000 person-years were reported with 95% confidence intervals (CIs), in addition to a measure of absolute risk. Further, standardized incidence ratios (SIRs) were computed with 95% CIs by comparing observed and expected rates. All analyzes were stratified by 10-year age bands and gender and for the vaccinated group by calendar month.

The study included 3,768,517 and 1,832,841 people vaccinated with ChAdOx1, and BNT162b2, respectively, in addition to 401,691 and 9,414,403 SARS-CoV-2-infected and the general public, respectively. The cohorts comprising vaccinated populations had more women, were older, and had a higher prevalence of comorbidities, whereas those infected with SARS-CoV-2 were younger than the general population. 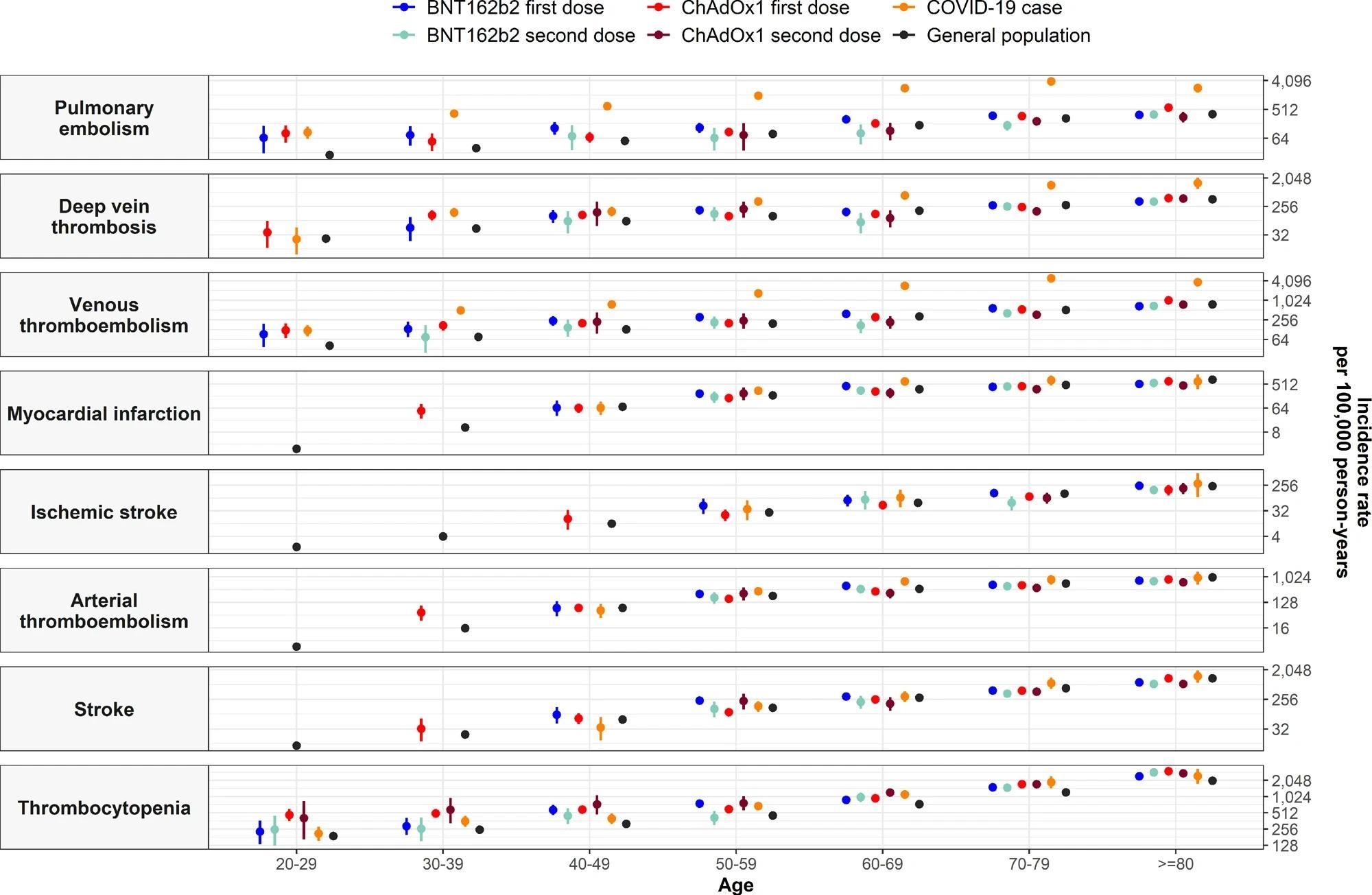 An increased risk of VTE was reported after the first dose of ChAdOx1 and BNT162b2 and with patient age across all study cohorts. Following first doses with both ChAdOx1 and BNT162b2, expected vs. observed VTE events were 771 and 866 and 533 and 595, respectively, with SIRs of 1.12. Conversely, expected vs. observed rates did not increase after the second dose of either vaccine.

Among first-dose recipients of both vaccines, IRRs increased among younger age groups, with IRRs reaching one for all age groups in the SARS-CoV-2 RT-PCR-positive cohort. This cohort had observed vs. expected VTE of 1090 and 150, with a SIR of 7.27.

PE, rather than DVT events, drove higher than expected VTE rates after the first dose of ChAdOx1 and BNT162b2. In the SARS-CoV-2 RT-PCR cohort, higher rates were due to DVT as compared to PE events. Furthermore, the SIR for PE after a SARS-CoV-2 RT-PCR positive test was 12.77.

Across all study cohorts, thrombocytopenia was more common than expected, with SIRs for BNT162b2 first dose and ChAdOx1 second dose of 1.27 and 1.47, respectively. The researchers noted more VTE events with concurrent thrombocytopenia than with ATE.

The observed vs. expected rates for VTE were higher after the first dose of ChAdOx1 at 16 vs. 12, with a SIR CI of 1.38. Rates of VTE with thrombocytopenia were relatively higher than expected after a positive SARS-CoV-2 RT-PCR test.

In the current study, researchers observed similar rates of arterial events among COVID-19-vaccinated people. However, further characterization enabled the researchers to show that such people were generally older and often had a prior history of related conditions or medications.

Nevertheless, the benefits of COVID-19 vaccines outweigh the risks, as the incidence of all adverse events among vaccinated people was rare.