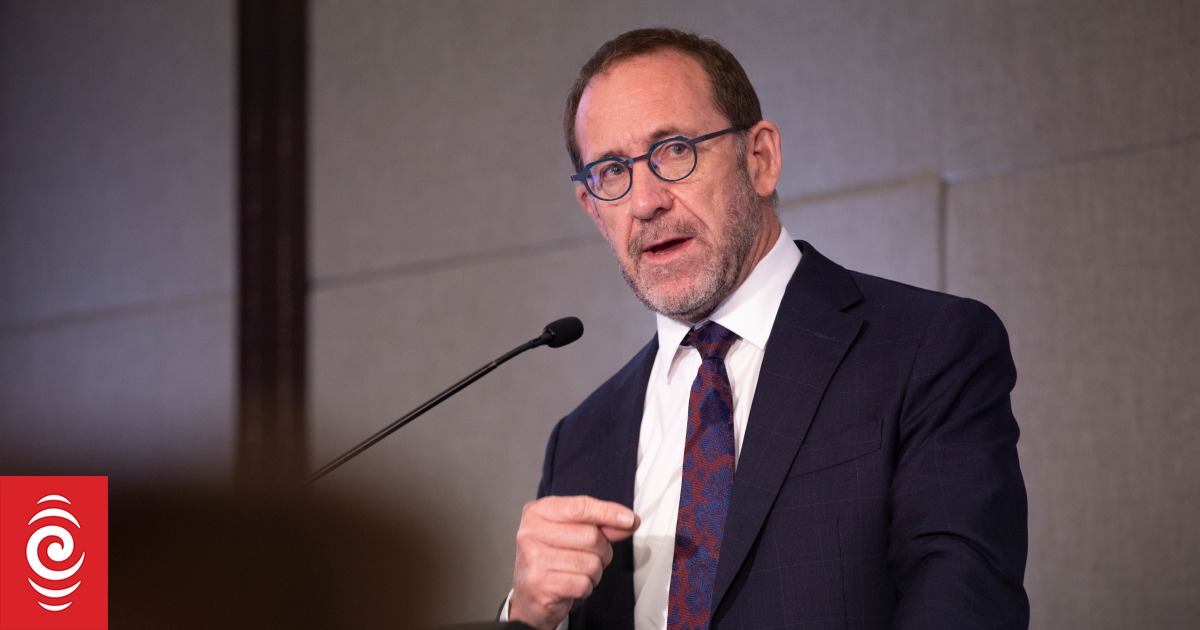 Andrew Little had few definite answers for action as he listened to the complaints.
Photo: RNZ / Angus Dreaver

Medical specialists have taken the opportunity to tell Health Minister Andrew Little just how bad things are on the frontline.

He was grilled on his plans to alleviate pressure on workers during the Association of Salaried Medical Specialists’ (ASMS) annual conference in Wellington this morning.

Healthcare workers spoke of 10-hour waits in emergency departments, doctors assessing patients in corridors, and ambulances stuck waiting on ramps for their patients to be admitted.

They said the workforce was at breaking point.

An emergency physician at Middlemore Hospital, Sylvia Boys, said she started each shift “on the soul destroying premise of 40 to 50 patients waiting to be seen, already been there for eight to 10 hours, 15 nurses short, several doctors short, and most of the beds in the ED full”.

She asked the minister what the plan was in the short term.

The minister said patients needed to expect to wait, and health organizations needed to shuffle staff around within hospitals to spread the load.

Nelson anesthetist Katie Ben said the ASMS had calculated it would take 100 years for the gap between Māori and non-Māori to achieve parity in health outcomes.

“I don’t know if we have 100 years to wait for our healthcare system to catch up with the inequity that we face every day.”

Little said: “When we’re dealing with some of the chronic issues… you have to start somewhere.”

He said Te Aka Whai Ora would not exist in its current form without his backing.

“The Simpson report recommendation about a Māori health authority was a very skinny, in my view, disempowered version of it. We didn’t accept that recommendation. I’ve gone further.”

‘A sense of moral injury’

Occupational physician Dr. Alexandra Muthu, whose specialty is caring for the health and well-being of medical staff, said people were burned out.

“People are coming into my office … and they cry, and they have a sense of moral injury that they can’t do what they know they should be able to do for their patients.”

Many were thinking of leaving, she said.

“I’ve found in the last two years that the very resilient people … who have just sucked it up for years, they can’t do it anymore,” she said.

She wanted Te Whatu Ora to commit to having an occupational physician on its executive to better care for the workforce itself.

‘Incredibly challenging circumstances’ but not a crisis

Even after hearing the testimonies from workers, there was a word the minister was still avoiding.

When asked: “When are you going to acknowledge that New Zealand is in a healthcare crisis?” the minister said he had “repeatedly acknowledged the incredibly challenging circumstances that we’re in”.

“The challenge for me is to work with the people I have to work alongside to address those challenges, and find the fixes to the problems,” he said.

A ferocious winter, on top of a pandemic, had highlighted the pre-existing issues within the system.

“Even before Covid the health system was facing major challenges, because of funding, or a lack of it, and a failure of funding to keep pace with population growth, among other things,” Little said.

ASMS executive director Sarah Dalton told Midday Report there was “some frustration” when the minister took a “whole of system, big picture, long-term” view rather than getting into the nuts and bolts of the crisis.

She said the importance of calling it a crisis came with recognition; their members felt the crisis was not being seen or heard from the Beehive.