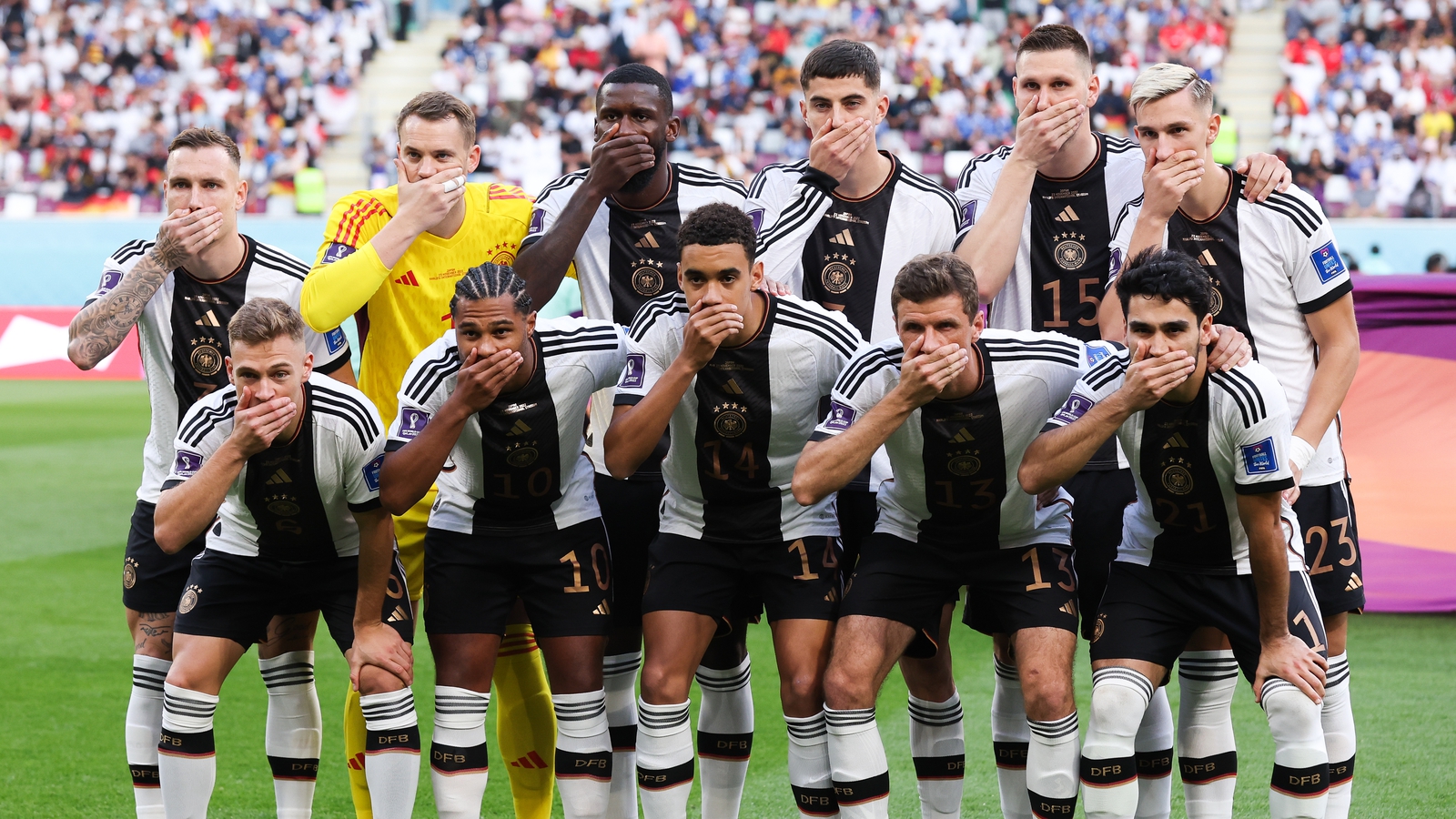 Germany’s players will not face any disciplinary action from FIFA after taking the OneLove armband protest to a new level as theirs players covered their mouths during a team photo at the World Cup.

The move marked another day of tension between the seven European nations who supported the OneLove campaign and FIFA, with the group – which includes the English and Welsh FAs – exploring their legal options over the matter.

The English Football Association declined to comment on whether the England team would copy the German gesture ahead of their match against the United States on Friday, while the Football Association of Wales chief executive Noel Mooney said he was “furious” with FIFA’s behavior.

England and Wales were only told hours before their opening matches on Monday that they would face sporting sanctions if captains Harry Kane and Gareth Bale wore the rainbow-colored armbands.

Mooney told ITV: “For months and months (FIFA) have known we were going to wear the OneLove armband, and to lay that one on us is pretty cheap and pretty low to be frank and we’re really disappointed by that attitude.

“We’ve been absolutely furious about this, we’ve given FIFA everything we’ve got in terms of how furious we are about this decision. We think this was a terrible decision.”

Asked whether he felt it looked like the OneLove group had backed down, Mooney said: “We didn’t back down. We had to look at the sporting sanction that was there.

“We had said we would take fines, we would accept whatever sanctions came, but when it turned at the very last moment to specific sporting sanctions that would have stopped our players taking the field of play potentially, that’s a different thing. It was done so late.”

The OneLove campaign started in September and ran for a year, but was set to be especially significant during the World Cup in Qatar, a country where same-sex relationships are criminalized.

The PA news agency understands that lawyers for the group are looking at the regulations to examine the sanctions the associations were threatened with. Danish FA chief executive Jakob Jensen confirmed legal options were being explored, but said the group could not immediately go to the Court of Arbitration for Sport.

Speaking about the ‘covered mouths’ gesture after his side’s 2-1 defeat to Japan, Germany coach Hansi Flick said: “It was a sign, a message that we wanted to send out. We wanted to convey the message that FIFA is silencing us .”

The German gesture could have prompted disciplinary action from FIFA under Article 11 of its disciplinary code. It states that anyone “using a sports event for demonstrations of a non-sporting nature” may be sanctioned.

FIFA has yet to comment on what the German team did, but it is understood there will be no formal disciplinary action from the governing body.

A tweet from the German federation read: “We wanted to use our captain’s armband to take a stand for values ​​that we hold in the Germany national team: diversity and mutual respect. Together with other nations, we wanted our voice to be heard.

“It wasn’t about making a political statement – human rights are non-negotiable. That should be taken for granted, but it still isn’t the case. That’s why this message is so important to us. Denying us the armband is the same as denying us a voice. We stand by our position.”

There is a risk though of the German gesture being an isolated one.

Switzerland are also part of the OneLove group, but their captain Granit Xhaka indicated his team would not stage a similar protest ahead of their opening match against Cameroon on Thursday.

Follow every game from the 2022 FIFA World Cup via live blogs on RTÉ.ie/sport and the RTÉ News app, or watch live on RTÉ Television and RTÉ Player

Listen to the RTÉ Soccer podcast on Apple Podcasts, Spotify or wherever you get your podcasts.