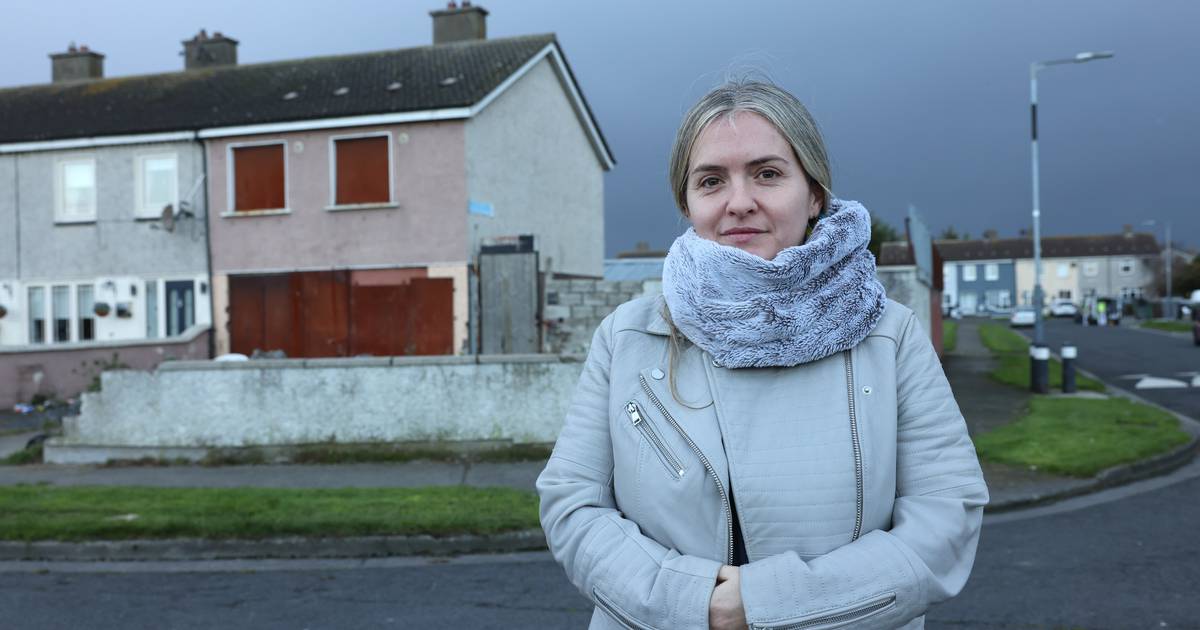 Nine houses are boarded up within just a few hundred meters of the Cherry Orchard Community Center in Ballyfermot in west Dublin, some of them surrendered over a year ago by council tenants leaving due to harassment, or because they could no longer tolerate living daily with the crime and violence taking place outside their homes.

On Thursday, Minister for Justice Helen McEntee will hold a meeting in the community center with community leaders and other representatives, where she will update them on plans to tackle anti-social behavior, crime and drug-related intimidation in the district, following a spate of widely reported incidents, including the ramming of a Garda patrol car in September.

In the wake of the ramming, Ms. McEntee held a meeting with local figures as a “first step” in advance of planning a “co-ordinated response… investment or regeneration” for Cherry Orchard. Thursday’s event, which was planned before a serious assault on two gardaí in Ballyfermot early on Monday morning, is taking place amid ongoing crime and intimidation which are forcing households out of the area, say councillors.

Croftwood is a small council estate housing about 1,400 people, just off Cherry Orchard Avenue. On one road of 23 houses, five houses are boarded up – their windows and front doors are covered with brown metal sheeting. Two of them have been empty for over a year. Scorch marks have blackened the front of one where a house fire preceded the exit of a young woman with children.

The Ballyfermot community held a rally in support of Gardai, after two members were assaulted and hospitalized outside a pub in the area.

Across the green is another house, boarded up over four years. On nearby Croftwood Drive, another home is abandoned, while on Cherry Orchard Avenue itself at least two homes are boarded up.

“Nobody wants to live here,” said one woman at her front door on Croftwood Gardens. “The stolen cars and everything. It’s terrible. It’s just young fellas, around the roads and robbed cars. The boarded-up houses are disgraceful looking.”

Another woman describes the boarded-up houses all around her as “horrible to look at… They make the place look run down and then you see people coming in to them, they’re out of it on drugs and they’re going into the gardens.”

A third woman says she was “on a high” when allocated a home having been homeless with two children. “But now I see it’s hell here. I usually wouldn’t open the front door. I wouldn’t let my kids open the door. I always say, ‘Don’t ever, ever open the door.’ We are like prisoners here.

“There’s needles and all sorts out there when you go out; people sell drugs 24/7. It’s hell.” Asked if she would like to leave, she says: “I would run as I am right now. I wouldn’t even take a cup with me. I have asked to leave. It’s horrible how we are being forced to live. The council and the guards are well aware of everything, but nothing is done.”

A teenager at another door said she had lived here all her life and “hates it”.

“The other morning someone tried to break into the house over there. Someone came along and hit the man over the head with a baseball bat. It was half past six in the morning. I don’t like it here. My whole family wants to leave.” She didn’t think the violence, noise and criminality could be stopped. “What can be done?” she asked.

Others love the community. “See this road,” said a woman in her 50s. “You can’t beat it. I would not for the life of me leave. I am 29 years living here and I wouldn’t live anywhere else. But we get nothing. We’re seen as scum bags, by the police, the council, everyone.”

[ Cherry Orchard: ‘The cycle of anti-social behaviour has been happening for 30 years’ ]

Local councilor Daithí Doolan wants to hear details of a “10 or 15-year plan for the area” from the Minister on Thursday. “It must include housing, sports and recreation facilities, employment, training and it needs to be underpinned with a Garda service that is visible, accessible, reliable and working with the communities.

“Cherry Orchard is at a tipping edge and we have to approach it with long-term solutions. Turning around disadvantage of over 30 or 40 years is not going to happen under just one Minister.”

Cllr Hazel Norton would like to see one of the vacant houses provided by Dublin City Council as a “hub” for community outreach and support “right in there, in the heart of the community where a lot of the issues are”.

“It would be great to get in there, and it would be the council coming at this with a ‘we-will-work-with-you’ approach instead of ‘there’s-nothing-we-can-do’ approach. I just can’t accept that approach. With all the resources the State has, it’s just not good enough.”

A spokesman for Dublin City Council said four of the vacant houses in Croftwood had contractors appointed. “It is envisaged that they will be refurbished and re-tenanted by early January 2023.

“The other properties have various tenancy-related matters to be addressed and the local area housing team are working to secure full vacant possession” to begin renovation works.