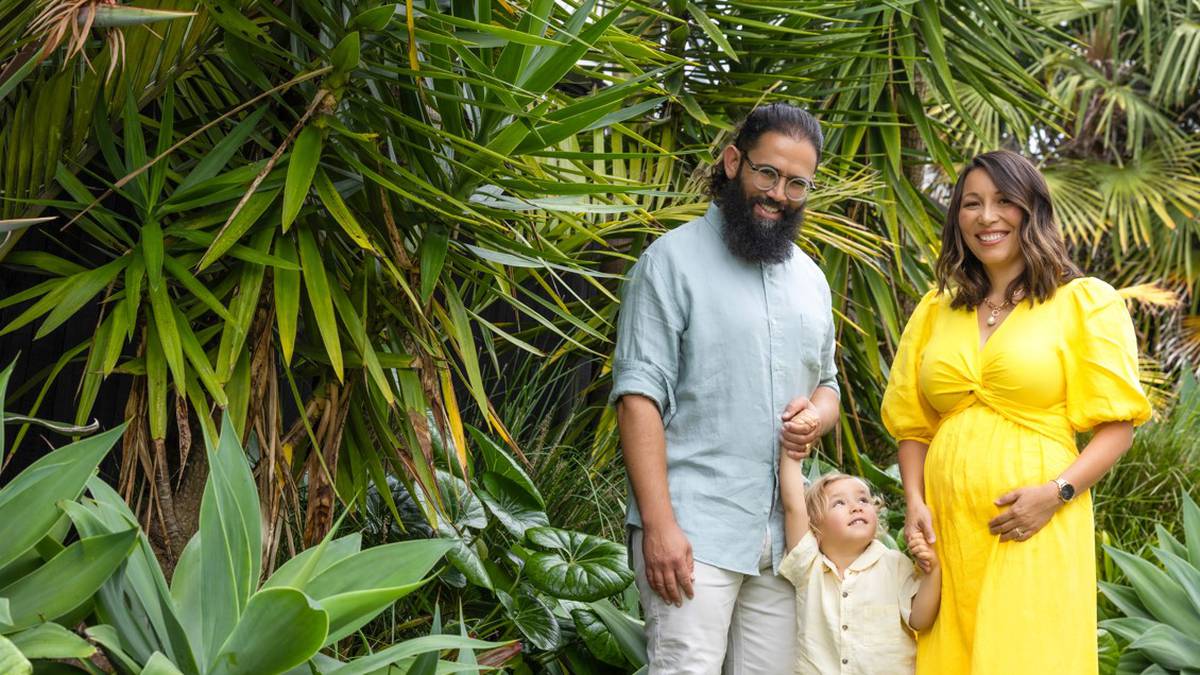 The AM house and experienced Palace reporter discovered she was expecting her second child just as the biggest story of her career was breaking. Photo / Jae Frew

Melissa Chan-Green had been preparing for months to deliver a lengthy live broadcast when news broke that the Queen had died. The A.M co-host and Newshub journalist had researched sovereign history and the current royal family, swotting up on our future king, poring over biographies and listening to a wide range of palace-centric podcasts.

Little did Mel know that on the day Queen Elizabeth II passed away on the 8th of September, she would be holding back on a huge piece of news of her own – and it was only after landing in London hours later to report on Her Majesty’s sad passing that the enormity of her secret hit her.

“The morning the Queen died, I went to work thinking I was really ill,” she says Woman’s Day. “I was also feeling really queasy the day before, but had put that down to nerves from doing a segment on A.M I had been dreading, where we attempted to do stand-up comedy. But when I woke up feeling sick again, I thought, ‘This could be morning sickness, but I haven’t got any time to deal with it.’”

Mel announced the news of the Queen’s death on air shortly after 5.30am and continued to broadcast for the next eight hours, texting her husband Caspar Green with an unusual request in a tiny moment of downtime.

“Everything was so busy that day,” she recalls. “I messaged Caspar in a break and said, ‘Can you please start packing my bag for London – and can you go out and buy me some pregnancy tests?’

“I got home at about 4pm. I took a pregnancy test and went straight to the airport knowing I was pregnant. It was a pretty crazy time. I was super-emotional on the flight and had a few tears when we came in to land. I think it was a mix of my pregnancy news, the Queen dying and seeing London again after being away from family there for such a long time. Watching Top Gun set me off too!”

Mel, 39, and Caspar, 42, had been hoping to conceive a sibling for Busby – who turns 3 this week – but the TV star didn’t want to get her hopes up. She explains, “When I landed in London, the first thing I did was buy five packs of Covid tests for our team and five pregnancy tests for me. And I think I took a pregnancy test every day for five days just to make sure it was right!”

The only people who knew were Caspar’s family, who live in southwest London.

“It was super-early,” says Mel, “but it was the first time I’ve seen them for four years. It was nice to be able to share some big news with them in person because we hadn’t been able to do it with Busby – he hasn’t even met them yet.

“Also, I think Caspar had given them a heads-up because he was worried about me as I had nausea.”

Mel was very aware that baby number two could coincide with one of the biggest news stories of her career so far. And looking back, it turned out to be the best timing, even if she did have to hide it from her colleagues, including Samantha Hayes and Patrick Gower, reporting alongside her in England for two weeks.

She laughs when talking about clandestine efforts to order mocktails without the team realizing and her stealth back-up plans for if she becomes unwell.

“I had times where I was touch-and-go with the nausea, and trying not to be sick on air. I remember when I was in London on the day of the funeral, just before I was about to go live, I had to go through a plan in my head of what I was going to do if I was going to be sick. I’d eyed up a bag on the ground behind the camera that I was just going to run and grab if I needed to!”

As Woman’s Day went to press, Mel had plans to surprise her A.M co-host Ryan Bridge with the news live on air she was expecting a baby in autumn and she’s pleased she soon won’t have to find creative ways to hide her bump on-screen.

Because Mel works such unusual hours – she’s in the Newshub studio at 3.30am, gets home around 10.30am and has afternoon planning sessions with the A.M team before going to bed by 8.30pm – much of Busby’s care is managed by Caspar, who works from home running a quiz company.

Telling us about their routine, he says, “Busby gets up about 6am or 6.30, I make him porridge and get him dressed, then I try to get him out the door about 8.30 for daycare. I go back home to do some work, then pick him up in the afternoon. I like to keep him entertained – he loves books, swimming and he recently loved going wall climbing.”

Just coming out of the first trimester, Mel is exhausted in the afternoons and needs a nap, so Caspar prefers to do the daycare pick-up and the family struggles to find a common meal routine during the week.

Mel laughs when she reveals, “Normally, I go to bed at the same time as Busby or sometimes he puts me to bed, says goodnight and goes to his room.” Joking about our gorgeous photo shoot, she adds, “Caspar and I are on a date right now – this is as good as it gets!”

The couple married on Waiheke Island in 2019 and moved into a new home last December, spending the past 11 months putting their own touches to it. Their current project is to replace the wallpaper in their living area and prepare a nursery. They want to have the DIY work done before Christmas as they are heading to the UK, so Caspar’s parents Ed and Jen can finally meet their first grandchild, and Busby can meet his Aunty Sadie for the first time too.

Caspar and Busby will stay in Britain for six weeks, and Mel for four. Caspar says with a grin, “Busby has only spoken to my family on FaceTime, so Mum and Dad are really going to enjoy it.”

The trivia guru met Mel seven years ago, when he was running a pub quiz in London, when she was nearing the end of her stint as Newshub’s European correspondent. He explains, “I like trying to help the punters with the questions and I was trying to talk to her at the same time.”

They had a long-distance relationship for two years before Caspar moved to New Zealand to be with Mel in 2018. He’s grateful he can create quizzes and update his collection of trivia questions for more than 115 UK pubs each week while still looking after Busby.

The couple didn’t find out whether they were having a boy or a girl with Busby and they haven’t yet decided if they will this time either. And when the time comes for Mel to have their second child, his or her birth date may be determined by this royal reporter’s regal tradition.

While having contractions with Busby, Mel went for a walk to speed things along, but found local streets closed as Prince Charles and the Duchess of Cornwall, as they were known then, were visiting an Auckland charity shop while on their tour of New Zealand. It echoed Mel’s mother Catharina Davies’ labor with Melissa – her journey to hospital was held up by a motorcade carrying the future king with his then-wife Princess Diana.

So anyone attending Mel’s baby shower might want to do some royal research of their own before guessing the day this baby is born – particularly if there are any royal tours announced for autumn 2023!