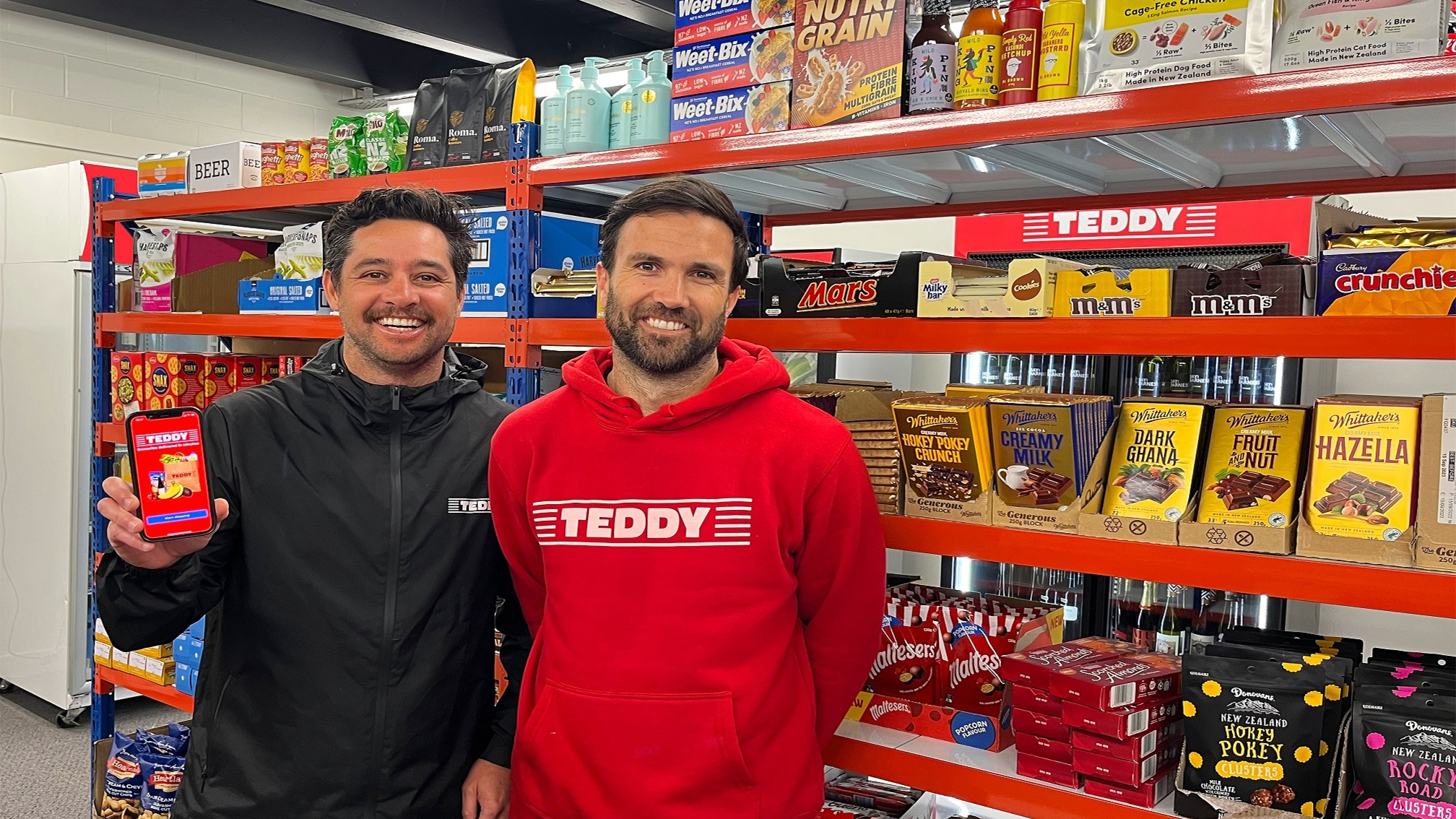 A new online grocery app is taking the competition to Uber Eat’s supermarket offering, and says its model means better service for customers and better conditions for delivery drivers.

Teddy was launched earlier this month in Auckland and Queenstown by former Sky TV executive Chaz Savage and bar-owning brothers Ricki and Daniel Taiaroa. The founders have previous form, having also started Food on Q in 2016, a restaurant delivery business covering an area in the South Island including Queenstown and Frankton.

The Teddy app is an online grocer but its point of difference is speed, with a $8.99, 30-minute turbo service or a “pool” delivery, priced at $5.99. This comes to you within two hours, although it currently has free delivery on offer to entice people to give it a try.

Teddy contrasts its delivery times with the big two supermarket chains, Foodstuffs and Woolworths, which it says offer delivery but usually next-day is the fastest available option.

The Commerce Commission’s market study into the grocery industry found the majority of New Zealanders purchase groceries in stores, but online sales are growing. In New Zealand, online grocery sales are estimated to account for 5.7% of all grocery purchases, compared with 5.9% in Australia, 8.1% in Japan and 24.4% in South Korea.

Woolworths, owner of the Countdown, Fresh Choice and SuperValue brands, told the Commission its online sales had increased from 3% of total sales in 2014 to more than 13%.

Other players have also seen an opportunity, with Soup launching online in April 2021 and rumors Australian outfit Geezy Go might cross the Tasman doing the rounds in late 2021.

But it’s Uber Eats that the trio are eyeing up with their quick delivery supermarket model.

The tech giant announced a tie-up with Foodstuffs in late 2021 which means 22 North Island Foodstuffs stores are on the Uber Eats app, allowing people to get rapid delivery of selected supermarket items for a flexible delivery fee, which can be between $3 and $4, and a $4 service fee.

Uber Eats drivers get paid a “base amount” which the company says is calculated on estimated delivery time, distance and whether there is more than one delivery, and they get to keep 100% of tips paid by customers. Of course, tips are optional and at the discretion of the customer and New Zealand doesn’t have a strong tipping culture.

Ricki Taiaroa says Teddy is positioning itself “quite differently” in the market than Uber Eats, which relies on a gig economy system of drivers choosing when to log into its app.

He says Teddy controls the customer experience better than its competitors because the person in customer service who handles your order is employed by Teddy, as is the person who collects your items and makes sure you get what you ordered, through to the delivery drivers who will get your order to you on one of NZ-brand Ubco’s trendy electric bikes.

“We think that’s an area where we can separate ourselves. All our employees are employees, and will have access to our employee share program. A lot of marketplaces treat employees as a commodity, and they don’t even know if they are going to get paid properly for a function.”

Ricki Taiaroa says people look overseas at grocery delivery models and read “scary articles” about how those services work, but its investors have understood why its model is different.

While the Taiaroa’s and Savage own 23.53% each of Teddy Technologies shares, it has heavyweight backing from the likes of The Warehouse founder Stephen Tindall’s investment firm K1W1 and Goldman Sachs partner David Gribble.

“The support behind us has been awesome,” Savage says. “Not only the people who put cash in, but the whole ecosystem around startups and investments has been really supportive.”

Teddy is sourcing its groceries from a split of Foodstuffs’ Gilmours wholesale business and dealing directly with suppliers, with Savage saying it’s about 50-50 now between the two.

Savage says the Teddy founders know they can’t “compete with the big boys” on price, and a scan of the goods offered on Teddy shows it’s not a budget shop, but it is a convenient, fast shop.

On the Teddy app a block of Anchor butter is priced at $8.99, while the same block is $10.19 from a Foodstuffs Fresh Collective store in Auckland on Uber Eats.

Of course, where Foodstuffs can drive down prices is with its own brand items, and this is where it gives Teddy a run for its money on price and speed of delivery.

But on branded milk, Teddy is cheaper. Teddy is selling 2 liters of Anchor Blue milk for $5.99 while Uber Eats/Foodstuffs has the same bottle for $6.19. However, Teddy doesn’t yet have a budget milk for sale, whereas Foodstuffs has a Value Standard two-liter bottle for $4.79.

Ricki Taiaroa says in its first few weeks of operation treat foods and indulgent purchases have been popular alongside alcohol sales, which he says was expected from the customer research Teddy did before launch.

It has been a rapid business build for Teddy. The three say they have been working on it for most of this year, with building the technology and the app itself the most time-consuming part. Getting groceries to sell has been less of a challenge, Savage says.

“We’ve found the industry in New Zealand really warm and friendly … but it is complex, and I wouldn’t say the solution we have got now is the one we will end up with, ultimately. We need a big wholesaler to give us a range to minimize the complexity of our operation, and they’ve been pretty openminded about the whole thing, they’re trying to make it work.”

But direct relationships with NZ suppliers and shining a light on NZ products is where Savage sees potential. He says Teddy hasn’t had one knock-back from his approaches to product suppliers, and says by being “really digital and really clever” he can showcase products like Duck Island ice cream or Jess’ Underground Kitchen’s meals.

Teddy has two warehouses, one in Grafton, Auckland, and one in Queenstown, and the big business goal is to expand Teddy into all main NZ centers within the next 12-to-18 months.

It may need more money to scale as fast as it wants to and could potentially hold an investment round early in 2023, but the Teddy founders who got their online supermarket up and running with a year, are confident that it will be doable.