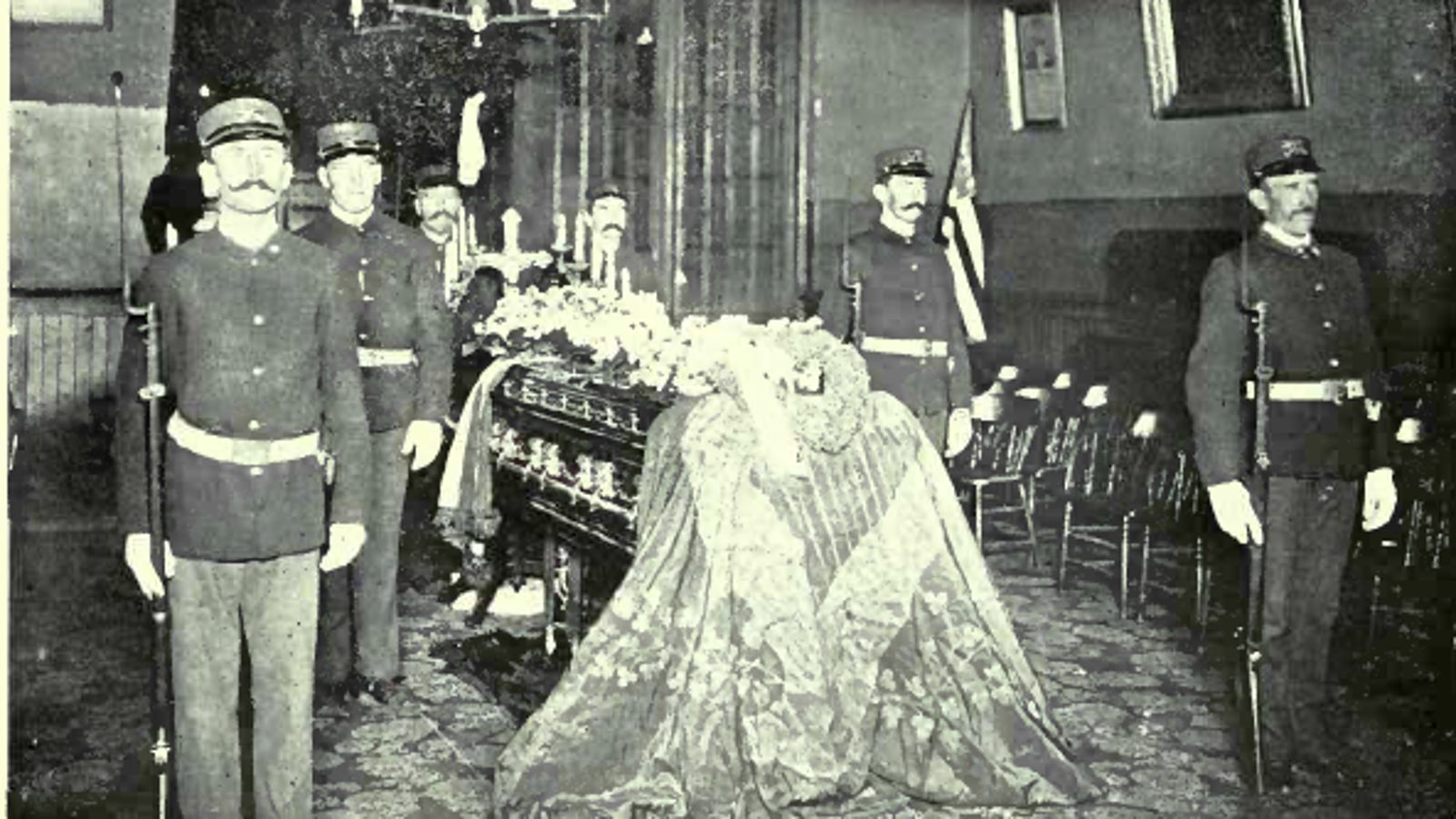 The story of Eoghan Ó Gramhnaigh‘s repatriation to Ireland is not a new one, and yet it is unknown to most outside of his native Athboy. Ó Gramhnaigh was born in Ballyfallon, Athboy, Co Meath in 1863. He became a key figure in the Irish language revival of the late 19th and early 20th century, known initially for his Irish translations of songs such as Auld Lang Sang (An t-am fad ó) and later for him Simple Lessons in Irisha series of booklets that helped the Gaelic League meet the huge demand for Irish lessons.

While his name was increasingly familiar to those involved in the revival movement, it was virtually unknown to the Irish populace until his death, after which he came to represent the displaced Irish – his glorious return bringing with it a renewed hope for the Irish nation and her diaspora.

Ó Gramhnaigh was a young adult when he first encountered the Irish language, and, having discovered a number of people in his local area who could speak it, among them a horse trainer called Johnny Gantly, he set about learning it.

Having completed his schooling in St Finian’s College, NavanÓ Gramhnaigh entered the seminary in Maynooth in September 1882, where he became increasingly absorbed in the language. Acutely aware that support for the language was growing nationally, he began to forge connections with members of the language movement, corresponding with language enthusiasts, and publishing Irish language material. He was ordained in 1889, but it was, undoubtedly, his love for the Irish language that dominated his life. In 1891, he became editor of Irisleabhar na Gaedhilge and was appointed Professor of Irish in Maynooth.

Ó Gramhnaigh struggled with poor health and he left Queenstown (now Cobh) for California in pursuit of a drier climate in November 1894. The following May, as his health continued to deteriorate, he moved to Arizona (where he enjoyed horse riding), but by 1899 he was forced to move to Los Angeles and the Mercy Hospital, where he died on October 18th of that year. He was buried in Calvary CemeteryLA, after funeral mass.

From RTÉ Archives, October 1963 RTÉ News report on a ceremony in Maynooth to mark the centenary of the birth of Eoghan Ó Gramhnaigh

One might reasonably expect the story of Ó Gramhnaigh to end at this point, but the story of the young man from Ballyfallon was just beginning. Back in Maynooth, Micheál Ó hIceadha, Ó Gramhnaigh’s successor to the Irish Chair, lamented his death and, in particular, his burial far away from his home. Such sentiments were echoed in speeches and in discussions among Gaelic Leaguers at home and abroad who began to wonder if Ó Gramhnaigh should not have been buried in Ireland.

In August 1901, a decision was taken to repatriate his remains. Plans now in place, the grave in Los Angeles was opened in September 1903. Following the exhumation, a funeral mass was held, the second since his death. The remains then traveled to San Francisco, where they lay in state for almost a week, flanked by members of the numerous Irish societies there.

After the funeral mass, with contemporary reports telling of a cathedral packed with mourners, the remains journeyed to Chicago, where the third funeral mass since exhumation, the fourth in total, took place. The remains then headed to New York, arriving on September 17th. A funeral mass was celebrated the next morning St Patrick’s Cathedral and thousands reportedly came to pay their respects.

Plans for his arrival home had been underway in Ireland since the exhumation, and arrangements were in place in Cobh, Dublin and Maynooth, where he would be laid to rest. On September 25th, Ó Gramhnaigh’s remains arrived in Queenstown aboard the Campania. A special service was held that evening St. Colman’s Cathedral, An tAthair Peadar Ó Laoghaire delivering the oration, and this was followed by a funeral mass the following morning.

The remains were then put aboard the train to Dublin, where they arrived in Kingsbridge (Heuston) Station and were greeted by a large crowd. A still larger crowd waited outside to accompany the remains to the Pro-Cathedral, where a requiem mass was held that evening, followed by a funeral mass the following day. The Freeman’s Journal questioned ‘if there has ever been seen in the Irish capital such a significant procession as that which passed through the streets of Dublin yesterday behind the remains of Father O’Growney’ (62).

Members of the Athboy hurling club guided the procession through the throng to Broadstone station, as the remains undertook the final leg of a journey which began in a quiet cemetery in Los Angeles. With each leg, and each funeral, the crowds grew bigger and the symbolism of Ó Gramhnaigh’s return became increasingly significant.

The following morning a funeral mass took place in the College Chapel in Maynooth, but this funeral was not followed by a burial, as might be expected. A grave had been dug in the College graveyard, but it was decided that Ó Gramhnaigh’s remains should not be buried but should remain visible, and a small oratory was commissioned. His remains were moved to the basement of the church tower, where they remained until February 28, 1905, at which point, following a last, quiet, funeral mass, he was finally laid to rest, his journey completed.

A great debt of gratitude is owed to Úna Ní Fhaircheallaigh, who compiled Leabhar an Athar Eoghan in which she recorded the story of his life, his death and his celebrated return.