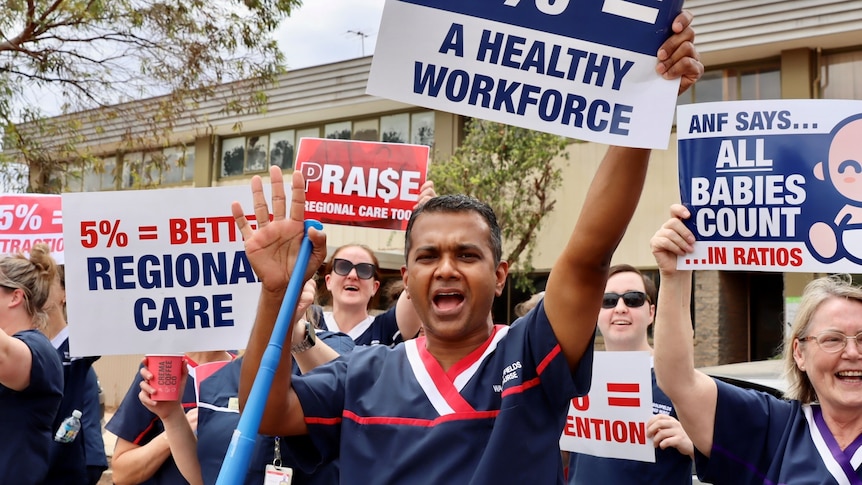 Thousands of surgeries, including procedures for cancer patients, have been canceled as nurses and midwives across Western Australia strike over an ill-fated pay offer.

The industrial action comes as the Australian Nursing Federation (ANF) ignored a summons to appear before the Industrial Relations Commission (IRC) this morning over the dispute over pay and conditions.

Thousands of nurses and midwives rallied outside the front of the state parliament, chanting “we’re not going to take it anymore.”

Wearing their work uniforms and holding signs demanding a five percent pay rise, they loudly booed the government’s claims that they are putting patient safety at risk by striking.

The protesters then marched to the nearby government offices at Dumas House, loudly cheering and waving banners to the ministers and their staff above.

The IRC today attempted to ban any bus company from transporting any personnel who were supposed to be at work.

But that bid was ultimately fruitless with an ANF spokesperson confirming that every bus the union had booked was filled to capacity.

A full-page newspaper ad by the government warned “Western Australians will experience disruptions at public hospitals today due to unprecedented and unlawful industrial action by the nursing union.

But the union said no patient’s safety would be put at risk.

Addressing a sea of ​​nurses in blue uniforms from the front steps of parliament, ANF state secretary Janet Reah thanked those nurses and midwives who had stayed behind to form a skeleton staff so that the strike could go ahead.

She then labeled Premier Mark McGowan and Industrial Relations Minister Bill Johnston as “cowards” for ignoring invitations to speak at the rally.

But the crowd’s loudest jeers were saved for Health Minister Amber-Jade Sanderson who had also declined the invitation because the strike action was “unlawful”.

The ANF assured its members that it would financially support all those taking part.

“In my 23 years with the ANF nurses and midwives have never gone on strike, the fact that you’re here today shows how desperate the health system has become,” ANF director of legal services Linda Bourke said.

“And we know this is why nurses and midwives are leaving and reducing their hours.”

Speaking in Collie, Premier Mark McGowan called on nurses to stay at work and accused the ANF of breaking the law.

“It’s erratic and unlawful, and they’re not behaving in good faith,” he said.

The Premier said an offer made last week met most of the ANF’s key demands and was agreed to in principle by the union leadership before they ‘backflipped’.

“So, I don’t understand why this industrial action is taking place against the orders of the Industrial Relations Commission,” he said.

Mr. McGowan said a five percent pay rise was unreasonable and the state’s $6 billion surplus did not change that.

“It is not reasonable to ask for that, and the state cannot do it,” he said.

“The surplus will go down, the surplus is a one-year thing.”

“We want to make sure we protect the state from the recession that’s coming next year.”

“In the negotiations the nurses’ union said ‘if you provide that we’ll settle’, we provided that,” he said.

“Then they said, ‘if you provide this additional allowance for some of the more senior nurses we’ll settle’, we provided that, then they didn’t settle.”

“This is what we’re dealing with… it’s not a rational way that the nurses’ union is acting.”

The Premier said hospitals were already feeling the effects of the strike.

Ms Reah told 6PR Radio the Health Minister had called her before 6:00am today and effectively guaranteed the strike would go ahead when she said there would be no change to the wages offer.

“She asked me to call off the strike, she said we were putting patients and the community at risk, which I denied,” she said.

“Our members are smart enough to know who can go to the rally and strike and who needs to stay on the wards and areas to look after patients.”

“She also said she wouldn’t be speaking to the members today as we are engaging in ‘unlawful strike action’ which again I deny that charge.”

Nurses and midwives are demanding at least a five percent pay increase.

Asked whether the union would have ‘blood on its hands’ if patients died due to the nurses’ strike, Ms Reah said the “blood” would be on the “government’s hands”.

Ms. Reah also confirmed that she boycotted her summons to appear before the IRC this morning because she believed it was an attempt to prevent her from attending the 11:00 am rally.

Ms Reah claimed category one elective surgeries would still go ahead amid the strikes, but that wasn’t the case for Sally-Anne Kelly, who was booked in for a breast cancer lumpectomy at Fremantle Hospital.

On Thursday, Ms. Kelly attended the hospital for a procedure that injects dye into the breast to prepare for a lumpectomy.

Ms Kelly described the procedure as “invasive” and the kind of thing you don’t want to do twice, but as she left the hospital, her husband was contacted confirming her surgery the next day was cancelled.

It’s what Ms. Kelly expected would happen when she heard the news of the strikes, but she said they should have told her earlier.

“If they’d canceled it before I had the injection, I would have gone to look, I understand, you can’t work without nurses,” she said.

“They should have been able to work that out really easy that they were going to have to cancel.”

The delay has extended Ms. Kelly’s month-long wait for her surgery by another two weeks, meaning her husband will have to take more time off work.

“I don’t blame the nurses at all, but I do blame the fact that the admin couldn’t work out that they were going to have to cancel today.”

Dozens of nurses at Broome Regional Hospital were among the first in the state to rally this morning.

“The last year has seen a huge rent rise, and paying to live up here is exorbitantly expensive,” she said.

“It’s really hard to retain staff, and we’re losing a lot of staff at the moment.”

Gill Furlong, whose nursing career spans more than 30 years said she was worried about safety issues which stemmed from the nursing shortage.

The Health Department has also canceled an awards night for nurses and midwives which had been due to take place this evening.

Some nurses expressed disappointment and claimed the move was to penalize nurses and midwives.

“It seems to be a really vindictive move by the DG,” one nurse said.

“There are lots of very angry and upset nurses (including me) who have spent lots of money on preparing for the night. Not to mention the country nurses who have traveled from abroad.”