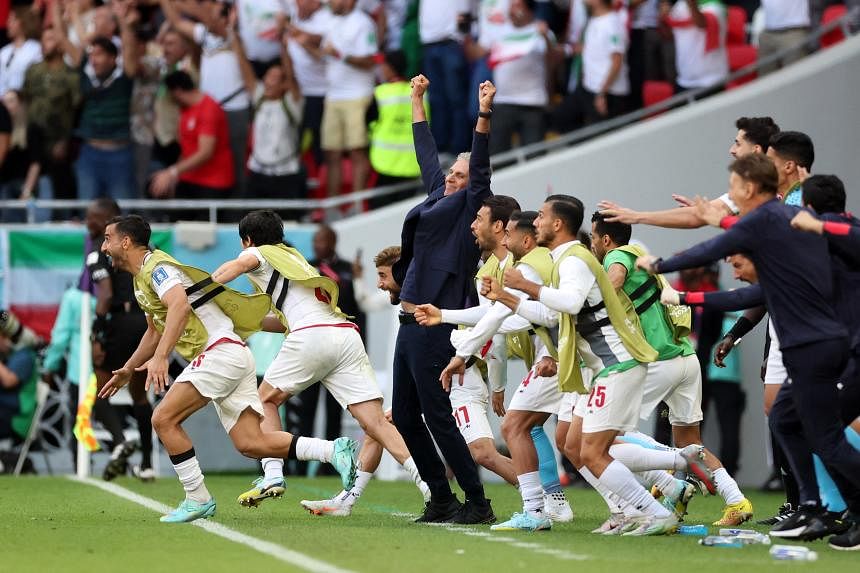 AL RAYYAN, Qatar – It was a cathartic release that had been bubbling for some time. Defiance, sadness, anger, anxiety all came pouring out in a powerful moment at the Ahmad Bin Ali Stadium on Friday afternoon, when Roozbeh Cheshmi scored in the eighth minute of injury time to spark Iran to a 2-0 win over Wales in their Group B clash.

Ramin Rezaeian doubled the advantage three minutes later to seal victory, which helped the Middle East side bounce back from their 6-2 drubbing by England on Monday.

Before the game, Iran’s supporters had wept as theirs players mournfully sang the national anthem amid threats of reprisals from hardliners back home.

In their first match against England, the players had stood stoic and silent during their national anthem in apparent solidarity with anti-government protesters, who have taken to the streets of Tehran for the past two months following the death of a 22-year-old woman while in custody of the country’s morality police.

Iran supporter Pourian Motlagh said the fans, many of whom cheered and whistled through the national anthem on Friday, held nothing against the players for singing, and were behind them all the way.

“We know they all love Iran. Team Melli (the national team’s nickname) has been and will always be a symbol of hope for the people of our country,” the 56-year-old told The Straits Times.

Indeed, they chanted, sang, beat their drums once the game kicked off and stomped their feet for the moment which beckoned several times but almost did not come.

In the 51st minute, Sardar Azmoun, and then Ali Golizadeh, somehow hit each side of Wales goalkeeper Wayne Hennessey’s upright within seconds of each other.

Then in the 72nd, midfielder Saeid Eztolahi saw his low shot from distance tipped just inches behind by Hennessey’s fingertips.

Hennessey was shown a red card in the 84th minute after colliding into Mehdi Taremi in a clash reminiscent of Patrick Battiston’s famous incident with Harald Schumacher in the 1982 World Cup, and with the extra man and nine minutes of added time, the Iranians roared even louder .

They were rewarded by Cheshmi’s long-range stunner and Rezaeian’s finishing touch off a counter-attack that punished a deflated Welsh side.

“When that (Cheshmi) goal went in? Oh my god, I cannot describe the feeling,” said Mansour Khani, 38. “I thought I was going to jump down over this place (to the lower tier of the stands).”

Iran coach Carlos Queiroz told BBC One: “This is just the beginning, but we need to finish the job. A wonderful day for us.

“All respect to my players, today they showed their love to play football. Our players deserve to be supported. We want to play for the fans.”

Taremi expressed his gratitude to the team’s supporters, saying that “they helped us all the time”.

And Team Melli will need the fans to act as the 13th man as they bid to reach the last 16 for the first time when they take on the United States in what is expected to be a politically charged clash on Tuesday.

“We need those supporters to support us like always,” AFP quoted Taremi as saying. “Even those who are in Iran behind their TV, we need their positive energy.

“We have a dream and we want to give that dream a chance.”

Wales, who came close to scoring through Kieffer Moore’s close-range effort in the first half and Neco Williams’ powerful shot in the 83rd minute that was tipped over, are now bottom of Group B with just one point from two matches. They face England in their last group match on Tuesday.

Skipper Gareth Bale said: “We are all gutted but we have to pick ourselves up straight away.

“It is going to be difficult for us for sure. We will have to see. What can I say? We recover and we have to go again.”

Fizzy drink was spilled, hugs between strangers were shared, and more tears were shed at the final whistle. This time, one of joy.