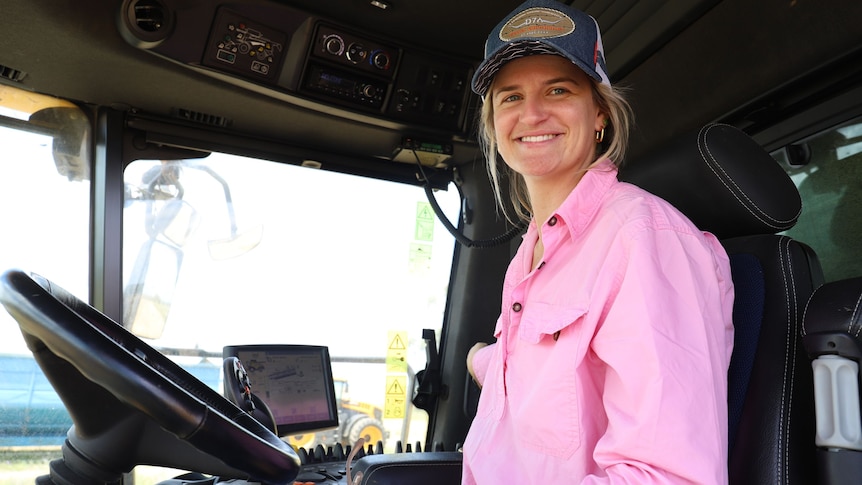 It’s mid-November, grain trucks are humming down the highways and header combs are turning in the paddocks, cutting through wheat, barley and chickpeas.

Harvest has started along the NSW/Queensland border, and it’s all hands on deck.

As the labor shortage bears down on farmers, an unlikely crew of helpers have stepped up to ensure the crop comes off.

People such as Avalon Newman, who has swapped her surfboard for a tractor towing a chaser bin full of grain near Moree.

“I spent my whole life at Coffs Harbour. I would surf every day and walk around wearing bikinis and tank tops,” she said.

While scrolling TikTok, videos of the grain harvest popped into her feed, something she had never seen before.

“I was like, ‘that looks amazing, I want to be there, I want to do that’,” Ms Newman said.

Before long, she was reaching out to Seasonal Work Australia, an Instagram account run by “just this young girl, trying to get people to come and help out west”.

“She said there was no resume needed, no experience needed, nothing,” Ms. Newman said.

Two days later, she was packing her bags ready to move to the country.

The young woman behind the Seasonal Work Australia Instagram account is Heidi Morris, a Moree-based wedding photographer who puts down her camera each year to drive a 20-tonne header during harvest.

“The demand for workers out here is incredible,” Ms. Morris said.

“[Harvest] has just become such a big thing.”

The decision to stay, long-term

Sophie Hemsley-Hackett was managing a Returned Servicemen’s Memorial (RSM) club in Casino on the NSW north coast when she decided to pack up and head inland to work on a farm in Moree.

It was meant to be a short-term job, but a year later she was still there in what turned into a full-time career on the land.

For the locals, the people who stay on or choose to come back year after year are worth their weight in gold.

People like Chris Turner, a Victorian carpenter who caught the bug after just one season and now runs his own contract harvesting business.

Each year he takes a break from the job site to drive his headers 1,500 kilometers north to Bungunya, in southern Queensland.

At first, the transition from tools to tractors was a shock to the system.

“I was pretty green, I’ll be the first to admit that, especially on the mechanical side of things,” he said.

For Gravesend farmer Mick Barwick “the eclectic group” of harvest help is a godsend.

“It’s a huge job, so it’s a really intense period of six to eight weeks,” he said.

For the farmers, the time and effort it takes to train newcomers adds to the workload, but Mr. Barwick says he would give anyone a go.

“It’s operating heavy machinery under a high-stress situation, but certain people are good at it,” he said.

Making a life in the bush

When Avalon Newman returns home to Coffs Harbor she still enjoys paddling out for a surf, but her new rural life in Moree is still with her.

“Some people might think it’s a bit challenging, but I think it’s great. They teach you a lot and respect you out here,” she said.

“Maybe back in the day they might have thought girls can’t do that, but now everyone is so encouraging and welcoming, you can do anything.

ABC Southern Qld will deliver a wrap of the week’s news, stories and photos every Wednesday. Sign up here